The public-private partnership of Cabeólica in Cape Verde off the West Coast of Africa has harnessed the country’s plentiful winds to help reduce diesel imports and increase energy security.

"The rate at which Cape Verde has achieved such a high proportion of wind power in its electricity mix is truly staggering. It is showing other resource-stretched small islands around the world what can be achieved, where there’s a will."

The Republic of Cape Verde is a volcanic archipelago about 600 km off the coast of West Africa, with nine inhabited islands and many small islets. Like many island states, until recently Cape Verde had to rely exclusively on diesel to power its electricity supply. Diesel is expensive on islands because of the cost of transport, and this is particularly true for Cape Verde since it is not on a major shipping route and has to transport fuel to its many small islands. Fuel for electricity generation represents about 20% of the country’s import costs, and consumer electricity prices are high, around US$0.40 per kWh.

However, Cape Verde lies in the path of the North-Easterly trade winds, with consistent wind speeds of up to 10m/s, and it therefore has considerable potential for wind power. Donors have funded small scale wind projects since the 1970s, including three small grid-connected wind farms, but most have gone out of use.

The Government of Cape Verde recognised the financial and environmental cost of diesel based power generation, and had for many years attempted to develop the country’s wind energy potential. In 2006 the Government partnered with InfraCo Ltd. to undertake initial detailed studies which concluded that it was feasible to install a relatively large wind capacity. Cabeólica was set up to deliver the wind project, backed up by the ambitious Government target of 25% electricity from renewables by 2012 and 50% by 2020.

Cabeólica SA is a private-public company established in 2009. Its shareholders are the Africa Finance Corporation (a Pan-African development financing institution); Finnish Fund for Industrial Corporation (a Finnish development institution); InfraCo Ltd. (a donor-funded project development company that supports early stage infrastructure projects in developing countries); the Government of Cape Verde; and Electra (the local water and electricity utility company). US$78m of finance was raised during 2010 to develop wind farms on four main islands, with equity from the Africa Finance Cooperation, Finnfund and InfraCo Ltd., and debt from the European Investment Bank and the African Development Bank. Cabeólica has 10 employees, all of whom are Cape Verdean.

Azuri produces complete solar-home-systems that incorporate Indigo pay as-you-go The Government of Cape Verde and Electra started working with InfraCo in 2006. Wind farms were planned on the four islands with the highest electricity demand – Santiago (where the capital and the main commercial areas are located); São Vicente (former industrial hub and main port); and Sal and Boa Vista (the main tourist destinations). Each wind farm would connect to the national grid on the island, and all electricity would be sold to Electra.

InfraCo coordinated the preliminary work on site identification, wind speed monitoring, legal structures, environmental impact assessment, and technical engineering studies. Public meetings were held near the locations of each proposed wind farm, and all had positive reactions, particularly on Santiago where the highly visible wind farm was regarded as a symbol of progress.

Although the initial idea was for less than 10 MW total wind capacity, it quickly become clear that contractors and investors would be interested only with a larger scale project, given the remoteness of Cape Verde and thus the high overhead cost of working there. A decision was therefore made to increase the capacity to over 25 MW which would provide around one quarter of the expected demand on the four islands. This was a bold decision, given conventional concerns about managing a grid with more than 20% intermittent supply.

A formal public-private partnership was set up between the Government, Electra and InfraCo in 2008, and bids to construct the wind farms were invited from contractors. The Danish wind contractor Vestas won the bid, with its 850 kW ‘V52’ wind turbines. These are well-tried machines, designed for locations like Cape Verde with high windspeeds and weak electricity grids.

Work on the first two wind farms started in 2010. This included construction of access roads, foundations and hut and substation, minimising environmental damage as stipulated in the environmental impact plan; on-site assembly and erection of each wind turbine; installation of monitoring, control and safety systems and inverter; electrical connection of each turbine to the central inverter for the site; and grid connection. Even with turbines that are quite small by modern standards, the logistics were challenging, since all components, equipment, trucks and cranes had to be shipped to Cape Verde. Progress was rapid. The first wind farm, on Santiago, was commissioned and started generating in September 2011, and all four were in commercial operation by July 2012.

This is the first experience of large scale wind in West Africa, and it’s been an opportunity for the whole sector to learn and improve. There’s no precedent in other countries, Cabeólica is a real pioneer.

Cabeólica is responsible for management and operation of the wind farms. Each has a dedicated site engineer and security staff, and an overall project manager oversees the four wind farms. Vestas Cape Verde maintains the wind farms under a contract initially for five years. It has technical staff on site most days to undertake both planned and emergency maintenance, and also provides technical training to Cabeólica and Electra staff.

Reliable and detailed monitoring and control is essential for a wind project of this scale. A SCADA (supervisory control and data acquisition) system is constantly monitoring more than 50 parameters (including electrical, temperatures, blade position), and allows the output of each turbine to be controlled by varying the pitch of the blades. Data and control can be accessed remotely by Vestas, Cabeólica and Electra. There are multiple backup systems to minimise the risk of losing data or control, and including backup generators which cut in automatically if the power fails.

Electra is responsible for managing the output from each wind farm via the SCADA system, in order to integrate the wind power with the existing diesel generators on the island grid. Sometimes the full output of the wind farm can be utilised, with the diesel generators making up any shortfall to meet instantaneous electricity demand. At times when demand is low, Electra may ‘cap’ the output from a wind farm. When the output is capped, Electra is able to use the SCADA system to improve power quality by correcting phase variation and short-term voltage drops.

In 2005 I did my Masters’ thesis on the potential for 100% renewable electricity on Cape Verde, and people just laughed at the idea. But attitudes have changed completely. Within eight years, the ‘unthinkable’ has become a core part of government policy and targets.

Cabeólica has successfully constructed and commissioned wind farms on the four main islands. Operations have gone smoothly, and by the end of March 2013 the wind farms had generated a total of 96,000 MWh. The time for which the wind farms are available (ie not down for maintenance) exceeds 95% on all islands.

During the 12 months April 2012 to March 2013, when all except one were operating at full capacity, the wind farms generated 64,000 MWh, which is 21% of the electricity distributed by Electra on the four islands, or around 18% of the total supply to Cape Verde. On São Vicente and Sal islands, the average exceeds 30%. It is impressive to have achieved this high percentage use of wind within such a short time. The only country to achieve more than this is Denmark (28% in 2011), but it has built up the use of wind much more gradually.

Note that the output from all the wind farms has been limited by capping. This is particularly significant on Sal, because the wind farm was sized for projected growth in tourism which has been curtailed by the global recession. If all available output had been used, the wind farms would have contributed 30% of the total supply. Some capping is inevitable (for instance at night) but also Electra have been cautious about taking on large amounts of wind power before they were experienced in managing it. With over fifteen months of successful operation, the amount of capping is gradually being reduced, so the contribution from wind will increase.

A major reason for the Government of Cape Verde to push for wind power was to reduce the national dependence on oil products and the cost of electricity generation. This has been achieved, with electricity from Cabeólica cutting diesel imports by 22,000 tonnes to date, and saving Electra about US$1.8 million in 2012.

The introduction of wind farms has also increased the availability and quality of power, and reduced the number of power cuts. These improvements in cost, quality and reliability are encouraging independent generators on some islands to connect into the national grid. They are also stimulating other proposals to generate more renewable electricity.

Cabeólica works with local communities around its wind farms, guided by its detailed social and environmental plan. For example, small farmers who had previously grazed their cattle on the land purchased for the Santiago wind farm, were allowed to return under agreed safety conditions once the construction work was completed.

Cabeólica has provided well-paid professional jobs. All staff are Cape Verdean, and some were attracted back from overseas by the prospect of good jobs at home. 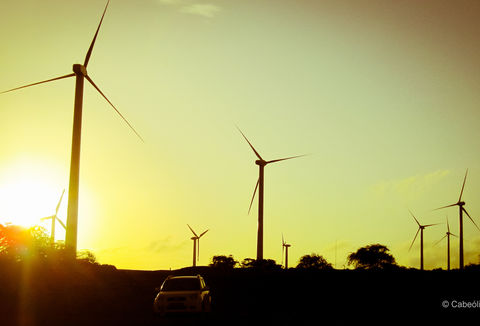 Reducing the use of diesel generation cuts greenhouse gas emissions by an average of about 0.71 kg CO2e per kWh (the figure varies between islands because of the different diesel generators used). On this basis, the Cabeólica wind farms have saved 68,000 tonnes of CO2 emissions to date.

Much of success of the Cape Verde wind programme comes from the culture of working and learning together that has grown up between Cabeólica, Vestas and Electra, along with an actively supportive government. A priority for all is to enable more of the available wind power to be used. Cabeólica will benefit from increased sales and Electra from decreased unit costs. Spurred on by the success of Cabeólica, the Government of Cape Verde has increased its target from 50% to 100% of electricity from renewable sources, so needs to get maximum utilisation of the wind farms.

One way to increase utilisation is to operate the country’s desalination plants (which use over 15% of Cape Verde’s electricity) at times when there is spare wind capacity. Increased desalination plant capacity and improved controls are being introduced in order to do this. In parallel, a technical review of the electricity distribution system on each island is under way to reduce wastage and enable increased use of wind.

If investment can be secured, the wind capacity could be increased in future, particularly on Santiago where electricity demand is growing rapidly.