In the early 1990s, Ghent was a city with a falling population and high levels of traffic congestion.

Ghent City Council has broken down the barriers to cycling and moved it into the mainstream, with a range of initiatives on infrastructure, bike availability and information designed to get people out of their cars and onto their bikes.

Ghent has 300km of cycle lanes (on and off road)

"We have introduced a Cycle Street and put ‘red carpet’ on it so everyone knows cyclists have priority and cars can’t overtake them. Cars are guests and cyclists are king of the road. It was technically illegal when we did it, but we did it anyway and then got the law changed."

Peter Vansevenant, Head of Transport Management Section of the Mobility and Parking Department, City of Ghent

In the early 1990s, Ghent was a city with a falling population and high levels of traffic congestion. To tackle both these issues, the city launched a Bicycle Plan in 1993. Its goals were taken further with the launch of a Mobility Plan in 1997, which included the introduction of a car-free city centre and encouraging cycling among its key components. Since then, cycling has gained in popularity year on year – achieved through extensive promotion, cycling infrastructure provision and uptake.

The success of these initiatives is obvious to any visitor to Ghent, particularly if arriving at the main railway station where over 7,000 bikes are regularly parked, making for an awe-inspiring sight.

City of Ghent’s Mobility and Parking Departments were merged in January 2012, with the mobility section responsible for cycling promotion and planning investment. Around 80 people are employed on the city’s Mobility and Parking projects with approximately one fifth of the total staff time spent on planning, implementing and monitoring cycling initiatives. 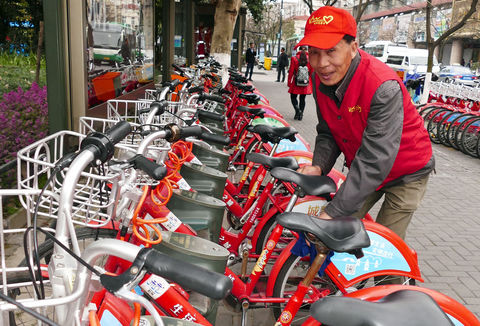 The mobility team works closely with colleagues in the parking section of the new department to implement new cycle parking initiatives, and with colleagues in the Road Department on infrastructure schemes. The Flemish Region, through its Highways Agency and its Waterways Agency, is also very active in providing cycling infrastructure. Public transport schemes are implemented in co-operation with the Flemish public transport company.

The cycling infrastructure has been developed extensively over the past decade and many cycle lanes are built alongside the city canal network, making for a pleasant cycling experience. A focus of current work is to take more cycle lanes off-street so they are segregated from traffic. This is being achieved by reallocating on-street car parking so that it forms a barrier between cyclists and traffic. In addition, cycle lanes are being redesigned so that cyclists pass underneath busy road junctions rather than across them. The emphasis on safety extends to warning signs on the cycling map showing busy junctions that cyclists may wish to avoid.

Recently, Ghent introduced a ‘Cycle Street’ on a key cycling artery – a new concept that views motor vehicles as ‘guests on the street’ which means they are not allowed to overtake bikes. This concept was introduced without a formal legal framework but its success meant that formal legislation was introduced to make the Cycle Street official.

The large infrastructure programme is supported by continued marketing and promotion, such as the annual autumn campaign to encourage cyclists to ensure the lights on their bikes are in good order. A grand bike tour of the city is held on the EU-wide car free day every year, and attracts 8,000 to 9,000 people, many of whom are children. A major Cycle Chic marketing campaign was held in 2011. This year a major campaign will focus on promoting going to the shops by bike, with a prize draw as an incentive.

Marketing of cycling in Ghent will continue to evolve and break down barriers in order to show that anyone can cycle. This will be a feature of future work with ethnic minority communities, older people and other groups of non-cyclists or occasional cyclists.

The city’s cycling website www.gentfietst.be provides a wealth of information including where to rent or buy a bike, how to get your bike registered to improve security, and tips for safe cycling. It includes an online cycle route planner which enables cyclists to plan their journeys and tailor them to show the shortest route or provide options to avoid cobbles, tram tracks or very busy roads.

A visual reminder of the importance of cycling is provided by two new cycle counters on major dedicated cycle routes. These count the cyclists that pass them, showing the current number on a large display – up to 9,500 a day. The apt slogan on the counters is ‘every cyclist counts’.

StudentENmobiliteit offers a dedicated cycle hire facility for students at highly subsidised rates. It is funded jointly by the university, colleges and the city, and has recently been expanded from 6,000 to 7,500 bikes for hire. The Max Mobiel cycle hire operation for the general public operates from the city station and offers 200 bikes for hire. Commuters and businesses are among the core clients. Max Mobiel also offers the chance to test novel cycles, such as those with child compartments, so that people have the chance to try out bikes before deciding whether to buy one from a cycle retailer. Both these cycle hire facilities also offer cycle repair from mechanics and self-maintenance facilities and are run by not-for-profit organisations.

As the number of cyclists increase, the easiest way to accommodate them will be to make more streets car free. We will have to look at making cars go another way.

Funding for cycling infrastructure comes from the Flemish government, the provincial government, the city and Flemish Waterways, with the city providing around 40% of the €4 million annual budget. Cycling infrastructure projects in Ghent now have access to a share of a €20m ‘reserve fund’ from parking revenues which is contributing to major cycle parking projects while the €150,000-€200,000 annual promotion spend is a core part of the Parking and Mobility Department’s activity.

There is now a total of 300km of cycle lanes in the city, stretching on routes unbroken for up to 15km while a further 60km is planned. Cycling has increased by 15% between 2008 and 2011.

Based on the increase in cycling in the last three years, and the associated reduction in short car journeys, Ghent estimates that around 1,500 tonnes of CO2 per year is saved through its recent cycling measures. Cycling now accounts for 19% commutes in Ghent compared with 12% in 2001.

The development of a cycling culture in Ghent means that cyclists are widely viewed as being more important users of road space than motorists, even in those areas of the city where dedicated cycle lanes are not available. Cycling itself is a recommended way of improving cardiovascular fitness, and has an indirect effect on reducing local air pollution by replacing shorter car journeys.

Bike rental is low-cost for students, with repairs offered cheaply – or free of charge through a DIY guide available via the website. Both Max Mobiel and StudentENmobiliteit are part of the social economy, offering employment to disadvantaged members of the community for up to two years.

The launch of the Mobility Plan in 1997 was intended to address Ghent’s falling population, and that trend has been reversed. Today cycling is seen as central to the economic viability of Ghent and essential to its goal to become a carbon neutral city by 2050. One example of this is the provision of employers’ pool bikes based at Ghent’s two railway stations. These can be booked for visitors arriving by train, enabling them to get quick, direct and lowcarbon access to the business or employer concerned.

Ghent’s aim to become carbon-neutral is supported by the creation of a car free city centre, coupled with a traffic system based on a series of one-way streets and reallocation of parking space, which has made large numbers of journeys quicker by bike than by car. A survey in 2009 showed that the share of journeys by car had fallen 2% since 2006, as cycling and public transport use increased. Traffic congestion in the heart of the city has fallen dramatically, providing associated benefits to businesses – traders in the city centre have not complained about any drop in business since the area was made car-free. The city interprets lack of opposition as a positive endorsement from a group which is highly sensitive to measures which can impact footfall. 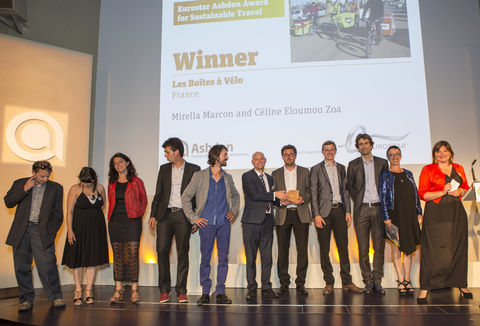 Political will for continued expenditure on cycling is a given in Ghent, with all political parties supporting it strongly. The Mobility Department’s merger with parking in January 2012 means that a new source of capital funding is available from the €20m parking ‘reserve fund’ built up from parking revenue. This is currently contributing to several cycle park schemes in the city and a new 10,000 space underground cycle park at the main rail station. Promotional budgets remain assured, and future marketing will focus targeted campaigns on social groups that are generally occasional or non-cyclists.

Other Belgian cities have followed Ghent’s lead, for example through implementing smaller scale student cycle hire schemes. Best practice initiatives such as the journey planning website are highly replicable, as is the emphasis on continued marketing which is regarded as giving exceptional value for money.