The city of Mwanza lies on the southern shores of Lake Victoria. The area close to the lake is fertile, but further away the land and people are poorer: houses are usually made from mud, and need frequent repairs and rebuilding.

Using agricultural residues for these bricks prevented the use of unsustainable wood, equivalent to the emission of about 750,000 tonnes of CO2.

By 2009, 133 brick makers had received training through MRHP and over 60 brick-making enterprises had been established.

"I've come a long way to learn this work. I've learnt how to make fired bricks and how to build a kiln. After I return home, I will start to build and burn bricks and sell them."

Mwanza, the second city of Tanzania, is on the southern shores of Lake Victoria. The area close to the lake is fertile, but further away the land and people are poorer. Here, houses are usually made from mud, and need frequent repairs and rebuilding because of damage from rain and minor earth tremors.

The region has a good supply of local clay which can be used to make durable, fired bricks for walls, although there is a shortage of wood to fire the bricks owing to severe deforestation. However there is a plentiful supply of agricultural residues which can replace wood in the firing process.

The Mwanza Rural Housing Programme (MRHP) has trained villagers in northern Tanzania to set up enterprises making high-quality bricks from local clay, fired with agriculturalresidues rather than wood.

MRHP was established in 1990 by the Belgian agency COOPIBO, in response to local requests for help to improve the quality of housing. Since 1995, MRHP has become a fully Tanzanian NGO working at the local level. In 2006, it had an annual budget of approximately US$144,000, mainly from grants, and employed 11 people operating in five districts of the Mwanza Region of northern Tanzania. As well as supporting brick-making, MRHP has also set up small businesses making improved wood-burning stoves, and runs tree-planting campaigns in the villages where it works to increase the supply of wood.

The agricultural residues used in the firing process include rice husks and cotton waste.

Coffee waste can also be used as a fuel, although this is grown in the Musoma Region of northern Tanzania rather than near Mwanza.

MRHP has developed a mould to make all bricks a standard size. After drying in the sun, about 4,500 bricks are stacked to make a temporary kiln (the ‘kiln’ is made of the bricks that are being fired and is dismantled as soon as firing is complete). MRHP encourages brickmakers to build a simple canopy over their temporary kilns to protect their bricks from rain which can damage them during brick making, drying and firing. The development of the kiln system has been participatory, with entrepreneurs feeding back suggestions for modifications.

Brick-making businesses need start-up capital for items such as tools and rain-canopies, and MRHP established a savings and credit scheme to provide loans to trained brick makers to help them set up businesses. By 2006, 12 businesses had borrowed between US$800 and US$2,400 (1 to 3 million TSh). The brick-makers sell their bricks directly to people who want to build houses, and repay the loans from their earnings. Using this system, a repayment rate of 91% has been achieved. MRHP prefers to lend to brick makers who have canopies over their kilns, as these produce better bricks and are therefore more reliable at paying back loans. 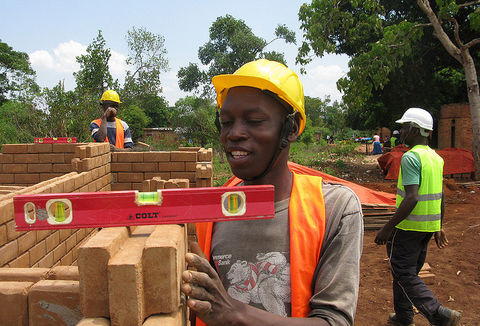 When the project started in the early 1990s, MRHP used donor funds to train brick-makers in low cost methods of house construction. It continues to provide essential training including business training to help enterprises start up. Existing brick making entrepreneurs also train people to assist them.

The field kilns do not require servicing, since they are rebuilt for every new firing. The permanent MRHP kiln is expected to last for many decades, with minimal maintenance.

Bricks made using the MRHP process have been approved to an international quality standard and this has enabled enterprises run on the MRHP model to sell to the high quality housing market.

MRHP has worked out the best method of stacking the bricks to give the most effective flow of heat and water vapour between them to produce uniform firing. The agricultural residue is poured between the stacked bricks and the outside of the structure has a wall made of unfired bricks. Users find it much easier to pack a kiln with residue than with wood because it flows more easily into the gaps between the bricks. Paper or dried grass is used to start the fire which then ignites the residue. This burns slowly for three days during which time the bricks are fired. After four days the kiln is cool enough to be dismantled and the bricks are then ready for sale.

MRHP also has a permanent kiln which has outer walls made from fired bricks. This can fire larger quantities of bricks at a lower cost but is fixed in one place. Unlike the temporary kilns, the permanent kiln uses sawdust as the fuel.

There is a great shortage of fuelwood in the region. Prior to MRHP’s work, makers of fired bricks had even started to cut down mango trees to use as fuel. Using local agricultural waste to fire bricks substantially reduces the pressure on the scarce wood supply.

Traditional firing of the 3,000 bricks needed to build a typical house requires about 1 m3 of fuelwood. The 300 million bricks produced sustainably by MRHP and its entrepreneurs up until 2006 have therefore prevented the use of about 100,000 m3 of wood (roughly 50,000 tonnes). Given the level of deforestation in the region, much of this wood would be produced unsustainably, and it is therefore equivalent to avoiding about 75,000 tonnes of CO2 emission. 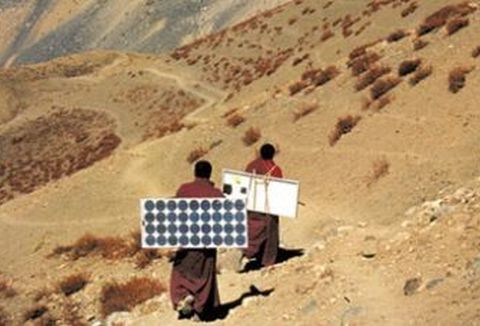 Prior to the establishment of brick-making enterprises, brick housing was relatively rare. Many people now live in houses that are more durable and of much higher quality. They are also cleaner and healthier and attract fewer insects. Most houses are constructed in the more urbanised villages known as ‘trading centres’. These houses have additional value because they have the potential for commercial as well as residential use.

Brick-makers work as independent businesses after they have received the initial training and support from MRHP. Each of the businesses employs between three and five people directly. By running a temporary kiln three times per month, a brick making business can produce about 13,000 bricks and earn about US$1,000 per month (1,300,000 TSh). Informal employment is also created for producers of un-fired bricks, who can sell them to the kiln businesses for about US$0.01 (10 TSh) each.

Demand for MRHP bricks is growing in urban areas. The bricks have been used in a programme run by one of the national pension funds to construct urban houses for civil servants and members of parliament, which has raised awareness of the work of MRHP at a national level. There is also demand for bricks to use in constructing secondary schools and in other social housing programmes, and in renovating the sewage systems.

The 2006 Ashden Award was used to train more brick makers and help them set up businesses, in particular helping people buy rain canopies for their kilns. By 2009, 133 brickmakers had received training through MRHP. The award also helped support MRHP’s stove and tree planting programmes, and funded workshops in environmental protection.

Since the 2006 Ashden Award, 11 more brick-making enterprises have been set up in 15 new villages. Cumulative brick production has grown by about 50%, with 150 million bricks made for a further 50,000 homes, and 150,000 for a new primary school with 16 classrooms and 10 staff houses. The cumulative wood avoidance has been about 75,000 tonnes, representing up to 110,000 tonnes of CO2 avoidance.

MRHP had always been reliant on grant funding, and it was clear that it needed more reliable finance. The Ashden Awards funded a professional volunteer through NGO Challenges Worldwide to work with MRHP and develop a five-year strategic plan. This recommended setting up a for-profit brickmaking subsidiary, and a business plan was prepared.

Thanks to a loan from the ERM Foundation, a new social enterprise was set up in October 2009, the Nyumba Bora Brick Company (NBBC), which is owed by MRHP. Profits from NBBC will provide long-term finance for MRHP activities.