A reliable power supply is critical for any business anywhere in the world. But in the Indian state of Bihar power is not reliable. Blackouts are frequent and debilitating for local businesses and farmers, often lasting for days at a time. Expensive and polluting diesel generators are often the only answer.

Local energy company Saran Renewable Energy’s response has been to build a generating plant run on gasified biomass. The biomass comes from ‘dhaincha’, a local woody plant which can be easily and profitably grown by local farmers. The generator connects to transmission lines to supply small businesses with electricity for a guaranteed 11 hours a day.

"I never used the mains electricity because it was so unreliable. The electricity from the gasifier is so reliable that I can use it all day."

Saran District is in a rural part of Bihar, one of the poorest states in India. In many places the mains electric grid has not been well maintained, and there is a shortfall in electricity generation capacity, so power is available erratically and black-outs can last for days.

Rainfall is high because of the monsoon, which feeds several important permanent rivers, but frequently causes flooding. In the dry season, it is possible to pump water from boreholes to irrigate crops, but reliable electricity is needed to do this. A significant proportion of the land stays waterlogged, and has limited value for growing crops.

Saran Renewable Energy (SRE) was set up to provide more reliable electricity in Bihar. It has built a biomass gasification plant at Garkha to gasify biomass bought from local farmers, and use the gas to generate electricity, which is sold to small, local businesses.

Saran Renewable Energy is a private company, which was established in 2006 by a family-owned grain-trading business. It has a board of four directors, and an annual turnover of US$66,000 and 12 staff (2009).

Locally supplied biomass is used as the fuel for the gasifier. The main source (about 70%) is from a native woody plant called ‘dhaincha’ which grows rapidly in swampy areas, and also on uncultivated land beside roads and rivers.

The biomass is fed into the gasifier and heated to a high temperature, until it gives off a mixture of flammable gases, mainly hydrogen and carbon monoxide. The gas is used in an engine to generate electricity, which is distributed to customers. 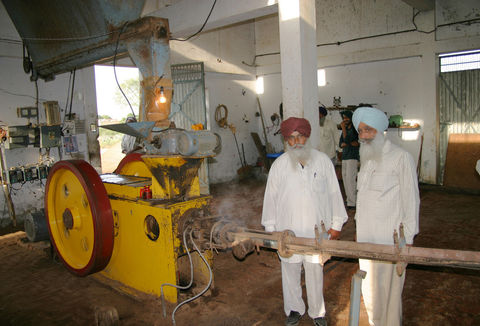 The electricity supplied to each customer from the gasifier plant is metered, and customers are supposed to pay each day. Contracts are negotiated with individual customers, at around US$0.15 (Rs 7.5) per kWh. As extra customers are connected and more of the available plant capacity is used, the price may decrease.

The state electricity price is only US$0.12 (Rs 6) per kWh, but customers are prepared to pay more for the reliability of the gasifier supply. Also, many customers had already given up with grid supply and were relying on diesel generators. Typical charges for buying electricity from diesel generators are about US$0.24 to US$0.32 (Rs 12 to 16) per kWh, so the gasifier supply is considerably cheaper, and gives a more stable voltage and frequency.

Where is it manufactured and how is it maintained?

SRE chose a down-draught open-top gasifier, manufactured by Netpro under licence from the Indian Institute of Science (IISc) in Bangalore. The dual-fuel Kirloskar engine is made in Pune.

The plant is maintained by technicians trained in Bangalore, with heavy maintenance undertaken by an engineering company based in Haryana. Both the gasifier and the engine used by SRE have been reliable, and the electricity generated has a stable voltage and frequency, which is particularly important for some of the small industrial users. The plant operates for about 85% of the time during scheduled hours of supply, but down time can usually be arranged for quiet periods so the availability for most users is higher. During the first two years of operation, the plant had to be shut down for only two days for emergency maintenance. With proper maintenance the plant life should be 15 years. Customers were already familiar with using electricity, so did not require much training to convert to SRE supply.

An adequate stock-pile of fuel is stored on site to prevent shortages but fuel is always available locally at very short notice since the plant is in a rural area.

SRE sold an average of about 300 kWh/day of electricity in 2008 (total 110 MWh/year), but production has since doubled. Sixteen electricity customers were supplied by mid-2009, and ten water pumps. The gasification plant operates for eleven hours per day, from 10:00 to 21:00, with average demand about 43% of capacity during this time. An estimated 200 users benefit directly from the electricity supply to businesses and shops, and a further 125 farmers benefit from irrigation water or from selling dhaincha to SRE.

We are getting more work done more efficiently and our income has gone up a bit too. We have no worries now.

SRE estimates that, taking into account the diesel which is used for ignition, about 0.35 litres of diesel are saved per kWh of electricity generated by the gasifier. The mid-2009 generation of 220 MWh/year therefore replaces about 77,000 litres/year of diesel and avoids the production of 206 tonnes/year of CO2. The plant also reduces the emission of other pollutants, such as nitrous oxide, sulphur dioxide and particulates, and is very quiet compared with diesel generators.

One of the main SRE customers is a nursing station, which uses electricity for run its services of collecting and analysing blood and other samples during the day time. To support education, SRE set up a study centre with free electricity, where children can study in the evenings. It also provides subsidised electricity to a computer training centre.

Most other electricity customers are small businesses, including grain and oil mills, a sawmill, a welder, a battery charging station, a cinema and ‘generators’ supplying village lighting. All benefit from a more reliable supply of electricity and the use of diesel generators has almost been eliminated.

Growing dhaincha is hassle free and very easy. It doesn’t need fertilisers, it doesn’t require much effort and it is very economical. It is generating money for our survival. It supports my family. It provides food and education for my children.

Electricity from the SRE plant is used to operate ten irrigation pumps by farmers living close to the transmission lines. SRE also runs an irrigation pump close to the plant and sells water to local famers. 30 hectares in total are irrigated, at about one third of the cost of diesel pumps.

SRE guarantees to buy agricultural waste and dhaincha from about 100 famers. The use of dhaincha as a fuel was introduced carefully to minimise competition for land with food crops. About 80% is grown on land which was previously uncultivated because it was waterlogged. Some of the dhaincha was already growing, and SRE provided seeds and advice to farmers to establish new plantations. Dhaincha sprouts at the beginning of the monsoon, grows rapidly and fixes nitrogen, so some farmers grow it as an additional short-season crop in the monsoon, on land which they are already cultivating. A farmer with a hectare of marshy land can produce about 5 tonnes/year of dhaincha and earn an extra US$150 to 200 (Rs 7,500 to Rs 10,000)/year, less transport costs, a significant amount in this region.

SRE employs 12 staff and 10 casual workers at the plant, and local managers for each 3 kV line. All the construction workers for the plant came from the local village.

In the state of Bihar, electricity generation capacity has not kept pace with demand. There is therefore potential to expand the current gasification plant, which was deliberately set up with space to double its capacity. There is also potential to set up similar plants in other areas where clusters of small businesses are close to farms which could supply the biomass, and SRE has already started dhaincha cultivation in two other areas. There is interest in the work in both India and Nepal and SRE is involved in setting up a similar plant in Bharatpur in Nepal. If plants were also set up to supply the many households who have never been connected to the grid, then demand would grow rapidly. Several similar rural gasification programmes have started elsewhere in India, and the demand for electricity is such that there is plenty of potential business. The main constraints, for SRE and others, are to find reliable supplies of biomass which do not compete with food production, and to attract investment finance.