Households with low incomes find it difficult to plan their spending. Money gets used for immediate needs, rather than for purchases that might improve life in the longer term.

The not-for-profit SKDRDP promotes development through a network of self-help-groups which meet weekly in rural Karnataka. The programme helps group members to plan their household needs, save money, and gradually take out affordable loans for domestic and agricultural needs. SKDRDP recognises the many benefits of access to electricity and clean cooking, so a key part of its programme is to provide information and loans for renewable energy systems, in particular solar homes systems and biogas plants.

Greenhouse gas savings of about 50,000 tonnes/year CO2 through replacing fuelwood and kerosene

"I’m a farmer, and I’ve been a member of a self-help-group for 17 years. At first I was worried about taking on loans, but they’ve been really useful. I’ve built a good house, put in a well, and installed a biogas plant."

Households with low incomes find it difficult to plan their spending. Money gets used for immediate needs, rather than for purchases that might save money or improve life in the longer term. Saving is often a low priority, particularly for those without access to banks. Credit, which could help spread the cost of purchases, is often unavailable because people have no collateral. This may drive households to borrow more than they can afford from unscrupulous ‘loan sharks’ at enormous interest rates.

Access to electricity and clean cooking can provide great benefits to poor households in India and elsewhere, but many are put off by the up-front costs and unfamiliarity. The not-for-profit SKDRDP therefore offers information and affordable loans for energy access technologies (solar home systems, biogas and pico-hydro). These are available for members of its self-help groups in rural Karnataka. The long-term support that SKDRDP provides to the groups means that members plan their spending and don’t take on more loan finance than they can afford.

The Shri Kshethra Dharmasthala Rural Development Project (SKDRDP) is a charitable trust and rural development programme, founded in 1982 by The Heggade, who is the head of the Hindu spiritual centre at Dharmasthala in the state of Karnataka.

SKDRDP promotes development through a network of 169,000 self-help-groups which now includes 1.8 million families, about 20% of rural households in Karnataka. The programme provides advice and information to help group members make long-term plans for their household needs and to save money. It also provides loans for domestic and agricultural expenses, through one of the largest micro-credit programmes in India. SKDRDP recognises the value of energy access as a key component of development, so since 1999 has provided information and loans for sustainable energy technologies.

I’m very happy with the biogas plant, I was tired of breathing in all that smoke. And now I don’t have to worry about gathering leaves to light a fire if a guest arrives!

SKDRDP funds the support and micro-credit programme mainly through commercial bank loans (US$170 million on loan in 2011) and also donations. It had about 3,800 full-time and 900 part-time staff in 2011.

The self-help group and loan programme

At village level, SKDRDP officers encourage neighbours to come together to form a group of between five and 20 people. Members come from all economic levels and faith groups. Most are agricultural workers, small farmers and traders, 70% of whom have incomes less than US$2 per day.

The group has to follow set procedures, including meeting each week and keeping detailed records of proceedings and financial transactions. Members have to save a fixed amount (at least US$0.20) each week. Each group member makes and records a five-year plan for their household or farm, including priorities for spending. The SKDRDP officer and other group members help with support and advice on the plan. Some groups focus particularly on agriculture and have a labour-share day each week, when they work in rotation on each others’ farms. 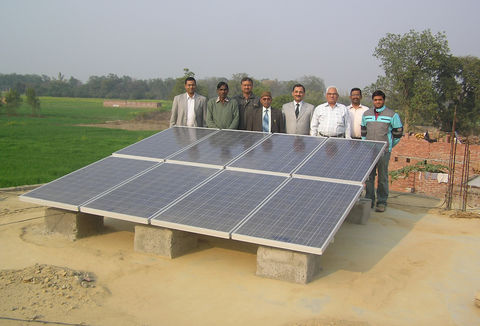 To become eligible for loans, the group must have been running smoothly and saving for at least three months. Members must also have had training from SKDRDP on handling loans. Initial loans are small (up to US$200 per member over 100 weeks) and for priority needs identified in the five-year plan. Each loan has to be authorised by the group and then higher up through the SKDRDP financial hierarchy, with detailed records kept at all levels. Repayments are made weekly, and each borrower receives a monthly statement with details of the status of each loan.

SKDRDP has developed expertise in renewable energy technologies, and has built up an ‘approved list’ of reliable suppliers for members who want to have loans. These suppliers must provide good technology and after-sales service, and also handle and pass on any government subsidy associated with their technology, so the individual customers do not have to do this. SKDRDP officers provide information on the different technologies at village meetings, where suppliers are allowed to give short presentations. If there are problems with after sales service, SKDRDP will help in negotiations with the supplier.

SKDRDP has created a loan product for each of the technologies that it supports, currently solar home systems, biogas plants, and very small ‘pico’ hydroelectric plants. Loans are for 100% of the cost of the system and charged at 18% annual interest rate (well below the government maximum of 26% for microfinance). They have to be paid back in weekly instalments of around US$3 (see box), over 150 weeks. In the past smaller loans have also been provided for solar lanterns and improved cooking stoves, but these are no longer actively promoted.

Groups get the opportunity of energy loans only after they have been running successfully for two years. Loan approval goes through the standard process, and it is then up to the individual loan recipient to buy from their chosen supplier.

It used to take us a lot of time to gather enough wood for cooking, so we’d pay people to gather it for us – but that wasn’t cheap! Then I saw biogas in my neighbours’ farms and I liked it very much. So we took out a loan for a biogas plant and it’s worked very well for us. The kitchen is a lot cleaner – there isn’t soot everywhere like before.

Currently SKDRDP has loaned out about US$3.2 million for renewable energy systems, about 1.6% of its overall lending portfolio of nearly US$200 million.

Nearly all the households who use solar home systems and pico-hydro are off-grid, and replace kerosene lamps lighting, saving approximately 140 litres of kerosene per year. This cuts greenhouse gas emissions by an average of 0.35 tonnes/year CO2 e per household, or a total of 2,700 tonnes/year CO2 e.

Biogas systems replace the use of wood for cooking and the indoor air pollution this produces. The liquid effluent (slurry) from biogas plants is used on crops, and can cut fertiliser use and the resultant pollution.

In many countries wood supply is unsustainable, so biogas plants reduce deforestation and CO2 emissions. However, Karnataka is well forested, so the wood supply is reasonably sustainable. But biogas is still valuable at replacing non-CO2 greenhouse gases in the emissions from wood stoves and fires, estimated at around 5 tonnes/year CO2 e per household, or 47,000 tonnes/year CO2e. Thus in total, the solar homes systems, pico-hydro and biogas plants financed by SKDRDP save about 50,000 tonnes/year CO2 e emissions.

SKDRDP self-help-groups give rural families the practical and financial support to plan and improve their lives and, as part of this, gain the many benefits of access to electricity and clean cooking.

For most households, the main benefit from solar or hydro electricity is clean, bright light instead of smoky, dim kerosene lamps. Working at home or studying in the evenings is easier. Outdoor lights make it safer to go outside at night since snakes and scorpions are easier to spot. Even grid-connected households sometimes buy a stand-alone system, because the grid supply is unreliable.

Biogas burns more cleanly than wood, so women and children no longer have to spend hours each day inhaling smoke. Cooking is easier and quicker, because the biogas stove lights immediately and the flame is easy to control. Collecting firewood is daily drudgery for many women, and puts them at risk of accidents, bites and hassle from forest officials. All this burden is removed by a biogas plant.

The renewable energy programme has provided 100 extra jobs in SKDRDP and encouraged new technology providers to the region.

Extra time becomes available for both productive and social activities, because of good quality light in the evenings, and around half a day per week may be saved from gathering wood. Women who work at home making incense sticks and bidi cigarettes can increase their production by about 30%.

Saving the cost of kerosene (about US$1.2 per week) covers about one third of the repayments on a solar home system. And households who previously paid US$3 to US$6 per week to purchase wood can cover all the cost of a biogas loan. However for many households, it is the quality and convenience of these energy supplies, rather than financial savings, that are most important.

SKDRDP is growing its solar and biogas loan programme, and expects this to become an increasingly large proportion of its overall lending. 70,000 more of the existing self-help groups will eligible for energy loans in the current financial year (2012-13).

SKDRDP wants to increase the number of groups, so that it covers all parts of Karnataka. One priority for expansion is the north of Karnataka, where there are large numbers of cattle and thus potential for biogas. It would also like to start operating in other states, but will do this gradually to make sure that the right management structure is developed.