Most urban households in Ghana cook on charcoal, using inefficient, polluting stoves made of thin sheet metal. The cost of charcoal is a significant proportion of household income. Nearly three quarters of charcoal production in Ghana comes from unsustainable wood, so using charcoal contributes to deforestation.

Toyola Energy was set up in 2006 to supply better stoves and other energy systems to low-income households in Ghana.

"I’ve only a market stall, but by selling Toyola stoves I’ve saved enough money to buy a plot of land and start building a house."

Most urban households in Ghana cook on charcoal, using traditional charcoal stoves made of sheet metal. These stoves are polluting and inefficient, and the cost of charcoal is a significant proportion of household income. Most of the wood used to produce the charcoal comes from unsustainable sources, so charcoal production contributes to both deforestation and greenhouse gas production. Toyola Energy was set up to bring cleaner stoves and other energy products to households in Ghana.

Toyola Energy Limited was founded in 2006 by Suraj Wahab Ologburo, a former accountant and Ernest Kwasi Kyei, an engineer, both of whom had been trained in stove production under the Ghana Household Energy programme (GHEP). They obtained a loan from E+Co to start commercial production and sales, providing work to 77 other artisans including some trained under GHEP. Further loans and carbon finance have enabled the growth of the business, which by April 2011 had five production centres in different parts of Ghana and one in the neighbouring Republic of Togo.

In 2009/10 Toyola Energy had an income of US$550,000, 72% from stove sales and 28% from carbon finance. It employs five people directly and provides work to a large number of self-employed artisans. It has a 90% shareholding in KT ceramics that makes the stove liners, and also has a wholly-owned subsidiary, Toyola Solar, that sells photovoltaic systems.

The Toyola Coalpot stove has an hour-glass-shaped metal body. The charcoal is burned in a heat-retaining ceramic liner, which has holes to supply air, and let the ash fall down. An adjustable door in the metal body controls the air flow and therefore the rate of burning.

The stove top is designed for the round-bottomed pots that are popular in Ghana, using robust metal pot-rests that give a narrow gap round the pot base and good heat transfer. The Coalpot was developed from the GHEP three-legged Gyapa stove, to be more durable, more stable (particularly with food that requires stirring), and also more efficient. 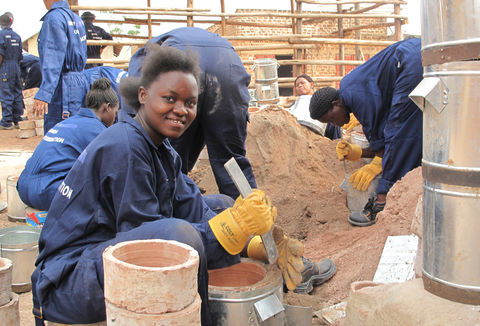 Toyola gives up to two months credit to its direct customers, and also to its dealers and sales agents who can pass the credit on to their customers. 75% of customers use credit, 20% pay cash, and a few pay by bartering produce such as cassava. About one third of credit customers use a ‘Toyola money box’ to reserve their savings on charcoal, and use this money to make their credit payments.

Everyone involved in production is trained and works to Toyola specifications. 40% of stove body production is outsourced, and all the liners are made by KT ceramics. The rest of the production, and the assembly, is carried out by self-employed artisans in the Toyola production centres. Each artisan must check the quality of the material and components from the previous stage, and reject work that is below standard. A random survey of stoves in use, undertaken to verify savings for carbon finance, shows that they are durable: only 2.5% go out of use within one year, 5% within two, and 15% within three. The liner is the part that fails first, but it can often be replaced.

Toyola sells about 60% of stoves directly to users, by taking stock out from its production centres on trucks, vans, carts and even boats. About 20% of sales are through conventional retailers – from small shops up to supermarkets. The other 20% are sold by local agents who work for Toyola on commission. Toyola records who assembled each stove, who sold it and who bought it, along with the serial number. These records are required for carbon finance verifiers, but also make it easy to track down the source of any problem.

Based on the survey of stove use, an estimated 143,000 stoves (93% of the total sold) are currently in use. With an average of 5.2 people per household and 50 people per commercial stove, this means that about 940,000 people benefit from Toyola stoves.

Because Toyola stoves are registered for Gold Standard carbon finance, there is regular monitoring of stoves in use, surveys of users, and audits of greenhouse gas savings.

Charcoal savings have been assessed using kitchen performance tests with the same households using their original stove and a medium-sized domestic Coalpot. The Coalpot was found to save one third of charcoal, an average of 0.5 kg per day. Thus the stoves currently in use are saving about 26,000 tonnes of charcoal each year, and so cutting the use of wood to make charcoal.

Perhaps surprisingly, Coalpots also cut fuelwood use directly. Surveys found that 30% of households used some fuelwood as well as charcoal for cooking. When they switched to using a Coalpot, their use of both charcoal and fuelwood decreased.

Currently, about 73% of the wood used in Ghana to make charcoal and directly as fuelwood is non-renewable (ie: not replaced by new trees). This means that saving charcoal and fuelwood by using Coalpot stoves helps to reduce deforestation.

Charcoal and fuelwood savings also cuts greenhouse gas emissions. Detailed assessments show that a Coalpot in use for one year in Ghana saves the equivalent of 1.03 tonnes of CO2. 84% of this is actual CO2, produced because of the use of non-renewable wood. Most of the remainder is methane emitted during charcoal production. Thus the stoves currently in use are saving about 150,000 tonnes/year CO2 e.

Coalpots are popular with cooks. User surveys show that food cooks more quickly: women save about 30 minutes per day, which they use mainly for family time and relaxation. The heat retention of the liner means that food keeps warm for longer, and the insulated stove base can be used like an oven for roasting vegetables while a pot cooks on the top.

The insulation that helps cut fuel use also reduces the temperature of the outside of the stove. Burns are reduced by over 90% and the person cooking does not get so hot. Health surveys show reduced incidence of eye irritation, shortage of breath and coughing.

User surveys in 2010 showed that households with Coalpots spent about GHC 160/year on charcoal compared with their pre-Coalpot expense of GHC 200/year. This saving of GHC 40 (US$27) per year is significant for households with cash incomes that are typically about GHC 1,200 (US$800) per year. It means that the cost of buying a Coalpot can be recovered from savings in charcoal within three to four months. Note that the savings do not take into account the fact that charcoal prices have approximately doubled from 2008 to 2011, so that the real saving is higher.

Five Toyola Energy production centres are operating in different parts of the Ghana, and one has recently opened (April 2011) in Togo. This means that training, employment and income have been brought to different parts of the country and beyond. In 2010 about 172 people were involved in production and assembly of stoves. Further income is generated within the supply chain, with traders and agents earning about 10% of the retail price on each sale.

Toyola Energy has grown rapidly since it started selling stoves in 2007, but demand for stoves in Ghana outstrips supply. To meet this demand, Toyola is planning to open new production centres in other parts of Ghana, and to start producing wood-burning stoves as another option for regions of the country that mainly use wood. Every artisan directly trained by Toyola agrees to train two further people, so that the number of skilled workers can grow rapidly.

Customers are happy with the stoves because they don’t consume much charcoal. It only takes a little for the food to be cooked. The stoves have helped me and my family. They have enabled me to buy land and expand my business. It’s great.

There is demand from other countries in West Africa with similar cooking styles. Toyola recently opened a production and training centre in Togo and currently exports to Burkina Faso. There are plans to open similar facilities in Benin, Sierra Leone and Nigeria in the next two years.

Carbon finance is enabling Toyola to grow, but the need for capital by both producers and end-users is still a constraint. Toyola is looking for a suitable bank or MFI partnership, and is also considering setting up a separate finance subsidiary.

The technology is not difficult for others to replicate. However, to reach large numbers of users requires the type of quality control systems and sales and finance network that Toyola has built up.