Ashden Cool Cities Award: can we protect the most vulnerable? Deadly heatwaves are
growing more frequent and intense, and cities simply aren’t ready for the
danger. That’s why we are launching the Ashden Cool Cities Award, searching the
globe for urban cooling innovation. By sharing the lessons of these outstanding
solutions, we can help more cities take life-saving action.

The extreme
temperatures of recent summers have underlined the need for urgent progress.
Cities around the world endured record levels of heat in 2019, particularly in
South Asia. Jacobabad in Pakistan saw the country’s highest ever temperature of
52.8C. The heatwave was linked to deaths across India, including 184 people in
the state of Bihar and four train passengers in Uttar Pradesh.

But even within a
single city, the danger is not spread evenly. Some residents are far more
vulnerable than others living just a few miles – or even a few streets – away.
So, we must understand the complex challenges faced by those most at risk. Then
we must make their protection a priority.

Our judges are hoping to uncover holistic
solutions that recognise, and build on, the inter-connected nature of our
cities. A fragmented approach will not create the liveable, resilient cities we
need. Harnessing the power of co-operation and community is crucial as we face
down this threat.

Who’s most at
risk?

Poverty is a key factor
that increases heat vulnerability. Home air conditioning is unaffordable to
many poorer people, and they’re less likely to get respite in air-conditioned
vehicles, or jobs in cool, air-conditioned offices. Aside from the issue of
price, there’s another problem with air conditioning – its use drives up
emissions of CO2 and other harmful gases, worsening global heating.

But the links between
poverty and heat vulnerability run much deeper than being priced out of a
single solution. Poverty impacts on every aspect of people’s lives, creating an
environment of increased risk. 630 million people live in urban slums, with the
biggest groups of at-risk people in China, India, Nigeria, Brazil, and
Pakistan, according to Sustainable Energy for All.

Compared to their better-off
neighbours, poorer city residents are more likely to live in cramped housing
made of heat-trapping building material such as corrugated steel. They will
probably live further away from parks or tree-lined streets, and the vegetation
that creates a cooler environment. And they are less likely to own a television
or radio from which they can get up-to-date information about an approaching
heatwave. They are also less likely to have access to clean drinking water.

Low-tech cooling
solutions exist – but these aren’t always as ‘open to all’ as you might think.
One example of this comes from the Kosad Awas neighbourhood in Surat, India, an
area dominated by four-storey concrete buildings. Ventilation by opening
windows might seem like a an obvious, free, cooling solution. But research by
the World Resources Institute found petty crime in the area meant women are
afraid to do so. The same research found that as residents often hold insecure
jobs, they struggle to avoid working in the hottest parts of the day.

Poverty is just one
factor driving heat vulnerability. Older people, young children, and people
with health problems are also at increased risk. Sometimes, as in Kosad Awas,
two factors – in this case gender and income – combine to fuel even greater
vulnerability.

The solutions are out
there – time to scale them up

The Ashden Cool Cities Award, supported by K-CEP, will uncover projects and initiatives
delivering cooling solutions, particularly for people most at risk. Promising
areas include work to lower temperatures in streets and public spaces, for
example through planting, shading, evaporative cooling or maximising cooling
from wind and water. Judges will also look for passive measures to
reduce temperatures in and around buildings, such as shading, insulation and
ventilation.

We are also looking for heat action plans that help cities prepare for,
endure and recover from heatwaves, as well as the creation and management of
‘cool zones’ for people with no access to cooling at home. As well as
front-line solutions, judges will look for innovation shifting the systems and
attitudes that underpin our response to the cooling challenge. This could be
work to change public awareness and political will, or new funding mechanisms
that bring climate-friendly cooling to more people.

Forward
thinking-cities are already bringing together a range of solutions. When more than 1,300 people died in a heatwave in Ahmedabad in 2010, the
Indian city worked with partners to implement South Asia’s first heat action
plan. Now the city uses a range of tools to let those most at risk of
heat-related illness know that danger is imminent, and runs education campaigns
letting people know what action to take.

The plans include extra steps to supply water to the public, and a ‘cool
roof’ initiative to lower indoor temperatures by painting roofs white. The
initiative makes sure that city officials, doctors, teachers, bus drivers and
others are working together to keep people safe.

In September the UN Secretary General recognised
efficient climate-friendly cooling as a transformational initiative that the
world has to scale up. Crucially, we need to find cooling solutions that don’t drive
further heating. If we can break out of this vicious circle, we can take a big
step toward tackling the climate crisis. 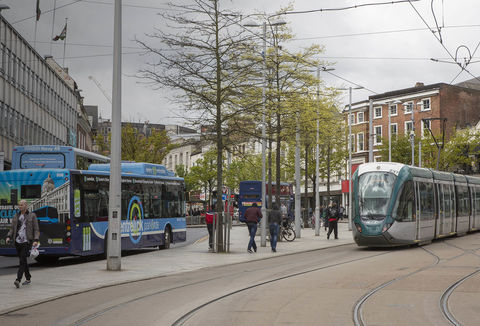 Apply for an Ashden Award for Cities

Building skills for a revolution in UK farming

The power of regenerative agriculture

Our progress on Diversity, Equity and Inclusion