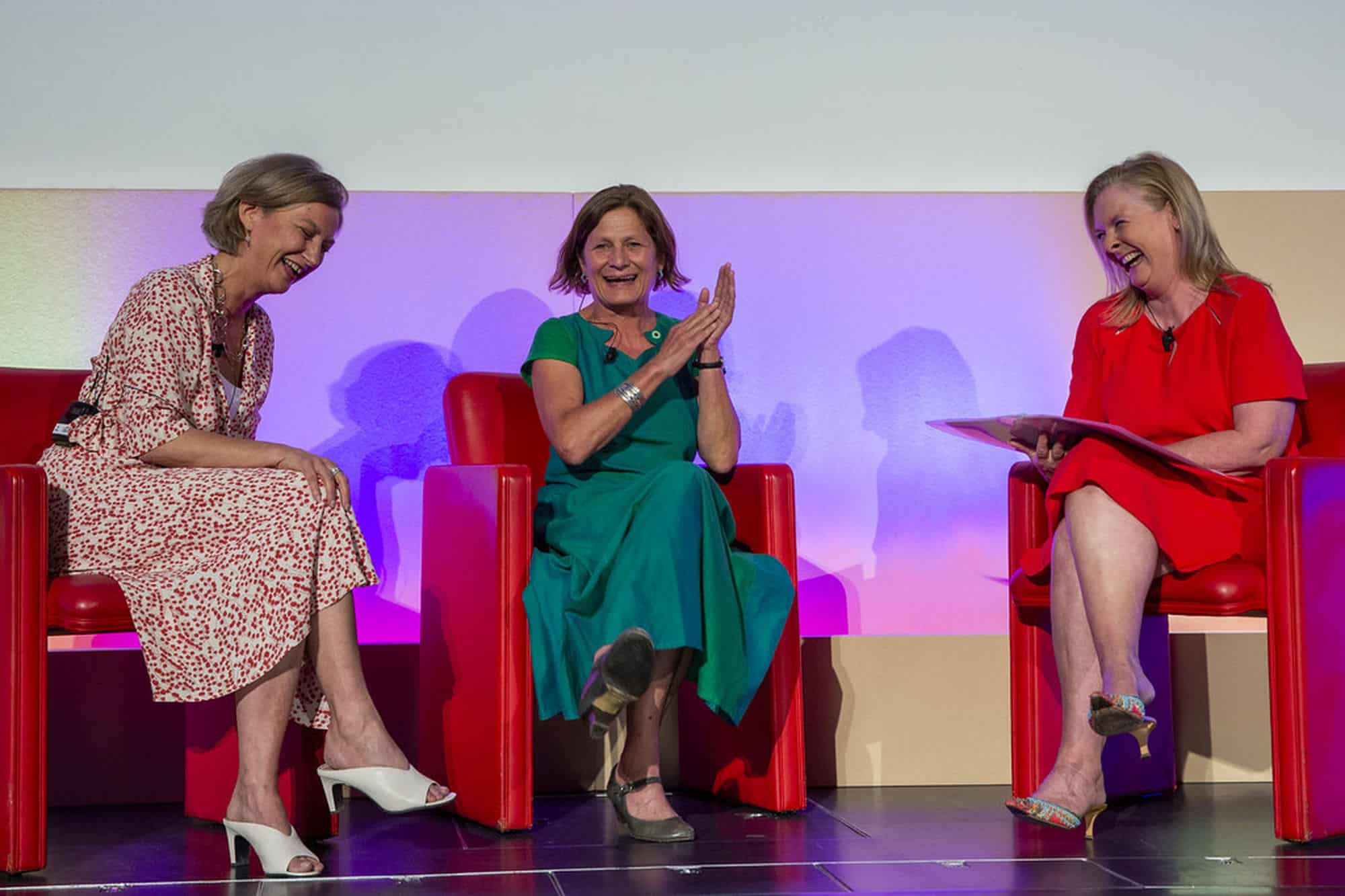 When Harriet Lamb was a little girl, she recalls writing in big – her ‘best’ – handwriting a quote by naturalist, Gerald Durrell: “Man is sawing off the very branch in which he sits,” she wrote.

Even as a small child, the quote resonated with her and she knew she needed to do something about it. Lamb has been a campaigner all her life. She talks openly about wanting to change the world through tackling what she believes are the four key issues of our time (she calls them the ‘four fires’); poverty; conflict; the refugee crisis; and climate change.

Lamb is arguably most well-known in the sector for her tenure as leader of international organisation Fairtrade, although her lesser-known achievements are equally as inspirational.

It all began in India, she says, where she lived with her parents from the age of five. She lived there until she was seven, but later returned on and off throughout her teens and again as an adult. It was during the former period when she became aware of the extreme poverty that some people live in, especially “in our, overall, very wealthy world”.

“I knew, even then, that countries have it well within their capacity to make poverty history themselves and I always felt that our role, as British citizens, is to change the structures that keep people in poverty.” These early thought processes defined her career as she sought about ‘working at home’ to help change trade policies, stop arms sales, make trade fairer and give more and better aid.

Despite her connection to India, Lamb initially studied in the UK, taking on a degree in English Literature at Cambridge University. “I don’t know why I did it – just because I was a girl, maybe?” she quips. “I was good at English, but I was good at lots of things, and so I quickly realised it was a complete waste of my time.”

She later switched, moving on to study social and political science – a field she felt would have much more meaning than “writing my opinions about Samuel Johnson’s plays from centuries ago – I mean, really, who cares?” It was at this point Lamb’s passion for the world and her education began to synchronise. She studied at the Institute of Development at the University of Sussex for two years, followed by a stint with the Low Pay Unit, where she began her work on ‘putting out the first fire’: tackling poverty.

Lamb was part of a team campaigning for the National Minimum Wage for two years. “It’s completely wrong that in a G7 nation, anybody should be getting paid any less than the living wage,” she says. “People were adamant that a minimum wage would cause the economy to fall apart; but it didn’t,” she adds, “we won, and the economy grew.

Keeping the pressure up

Restless after her first achievement, Lamb went on to work with refugees – an area she has continued to dedicate time to throughout her life. She tells me about her current involvement in a Community Sponsorship Scheme, whereby her community pulls together to raise money to sponsor and support a refugee family. She talks fondly about a ‘lovely, warm’ family the group have just housed in her South East London community. Following her initial stint in the North East working with refugees, Lamb moved back down to London, where she worked for the World Development Movement – now called Global Justice Now – and campaigned for the structural causes of global poverty.

She recalls one of the team’s greatest successes at the time: shining a spotlight on the Pergau dam affair. It remains one of the biggest aid scandals to date – in short, the Thatcher government used the aid programme as a ‘sweetener’ for an arms deal with Malaysia – and the group actively campaigned against it. “It was very controversial, and we were just convinced it was linked to the arms deal. We took it to court to say: ‘If this dam is so economical, why are we using aid for it?’ and we won, which eventually led to the ending of tying of aid to the purchasing of British goods.”

“In civil society, you have to keep the pressure up. All the time. You take one step forward, one step back and then you move forward again. You have to keep that pressure up,” she says. “It’s what enables government to get to the decisions that make a difference, and that is sorely under-recognised.”

The amount of pressure Lamb has applied to her career to date is almost exhausting. I listen, as she tells me about her achievements, knowing full well she is still yet to even touch on – what she later describes as her biggest achievement – her time leading Fairtrade.“I got hooked on the politics of bananas,” she says. “It changed my life. I went to Costa Rica to try and understand how it is that the bananas in our shops have got cheaper and cheaper – knowing full well that it’s because the conditions in which they’re produced had got worse.” She talks about DBCP – a chemical that was banned in the US but was still being sprayed across banana plantations.

It was around this time she met Maria, whose husband had been exposed to the chemical whilst working on a plantation. Maria had given birth to a baby with severe encephalitis. “It transformed my life,” Lamb says. “I realised that there absolutely has to be a better way to do trade. Cheap bananas are no trade-off for a woman who, at the other side of the world, is giving birth to a baby whose head is four times bigger than his body.” In her book, Fighting the Banana Wars, Lamb talks in more depth about Maria, describing how “as we sat there and she showed me pictures of her baby, rage bubbled up inside of me because the companies knew of the dangers of this chemical but they ignored them. I have never, ever forgotten Maria.”

It was at this moment when the opportunity came up for Lamb to run the fledgling Fairtrade Bananas in Germany. Shortly after, she returned to the UK to lead the Faitrade Foundation for a decade, followed by Fairtrade International. Under her leadership, Fairtrade grew to become one of the biggest and most active grassroots movements of our time. “When I started at Fairtrade, there were just 15 of us and then when I went back to Fairtrade International, there were hundreds of people. It totally transformed during that time and it continues to grow. It was my home.”

Leaving Fairtrade wasn’t easy, but, determined to continue in her mission to put out the world’s ‘four fires’, she moved onto International Alert in 2015, where she focused her energy on tackling conflict. “It was an absolute privilege – the organisation worked with some amazing people in the Philippines, Tunisia, Nigeria and beyond, building peace and tackling conflict,” she says.

But there was one fire left for Lamb to put out: climate change. She first heard about climate change from Fairtrade farmers, who were working on the frontline. “They were telling me it rained when it should be sunny, and it was sunny when it should be raining, making it impossible to farm,” she says. “Crops kept failing because the seasons were all over the place. Then they were hit by catastrophes such as mudslides and hurricanes, so it was interesting because they were saying to me – decades ago – that we must do something about climate change, as well as fair trade. Because otherwise, any gains we get from fair trade are going to be wiped out by climate change.”

In 2019, Lamb left International Alert to join sustainable energy charity Ashden. The organisation is relatively small (income of a couple of million), and works directly in sustainable energy and regional development to combat the long-lasting effects of climate change. One of the charity’s key areas of focus is its annual Ashden Awards – which are granted to organisations that deliver local, sustainable energy schemes with social, economic and environmental benefits.

Lamb’s previous CV highlights are not behind her, though. The charity has just introduced a new award based on energy access in refugee camps, allowing her to find places for some of the solutions she has been working on ‘to come together’.

Lamb is modest about her past and present leadership abilities. She probably wouldn’t consider herself a ‘leader’, although there’s no doubt she is. The first time I met her, she opened the Charity Times Investor’s Forum on Climate Change in 2019. She was swinging a bottle of ‘Energy Garden Ale’ between her fingers, talking about the role charities can play in saving the planet. She opened her speech with the line: “I have a confession to make: I was, myself, once a climate denier.” After speaking, she left the beer – a prop, of course – on the side of the stage like a dropped mic, and made it difficult for any subsequent acts to follow.

But they did; and she had inadvertently been their leader. For the rest of the day, speakers started their speeches with: “I have a confession to make, too…” telling stories of their – fairly innocent – climate-damaging lifestyles. I doubt she would recall her presence that day in the same way.

The biggest challenge about being a leader, she says, is knowing how to stay relevant. “Organisations can get stuck in whatever their vision was when they were founded, and not move with the changes, and that’s a problem – arguably for bigger organisations. The bigger you are, the harder it is to change.”

But some challenges are universal for charities of all sizes, Lamb adds. “There’s one challenge all charities, of all sizes, will constantly be grappling with and that’s how to have the greatest impact.”

“It doesn’t matter whether your charity is huge or tiny, that’s got to be the constant problem you’re wrestling with. How can you, with your particular organisation, at this particular time, have the greatest impact?”

Ashden’s current point of impact lies in education, as Lamb drives the organisation through a period of increased attention on getting sustainable energy on the education agenda. The organisation is currently working with hundreds of schools across the country to achieve this.

In her spare time, she’s also busy writing a new book on how civil society is driving the biggest global issues of our time – although she remains mysterious about exact details and publication dates. In the meantime, she remains focused on putting as much energy as possible into mitigating the effects of climate change.

When I meet with Lamb, it’s the day of the Spring Budget, and she expresses fears over a potential lack of attention to climate change, given the fact coronavirus has just become an extremely pressing issue (we had no idea what the next few weeks would have in store). “Climate change is real, it’s now. The good news is that solutions are here and people are thinking about/know about them economically and politically – but now we just have to pile in behind them.” She says the latter part of the sentence as though she hasn’t been doing it all of her life.

Later that night, I open the beer Lamb left on the stage (someone had to take it) and think about our conversation. In between fleeting feelings of inadequacy, I think of a younger, more naïve, version of Lamb, writing Durrell’s quote out on a piece of paper. I don’t suppose for a moment she thought about the fact that although a man was sawing off the branch he sits on, it would be a woman to fix it.

Fair Cooling Fund pledges $580,000 to protect the most vulnerable / Grants and support for frontline solutions