GAP developed the Environment Champions programme to help organisations reduce energy use and waste production in the workplace, largely through behavioural change.

"GAP is my Open University to learn about green issues."

Many businesses and NGOs working in sustainable energy focus on technology. While improved technology is crucially important for achieving a low-carbon future, it needs to be complemented by changes in behaviour. Behavioural change is difficult to achieve, and especially to sustain, but it holds out the promise of significant reductions in energy use and carbon emissions achieved at low cost.

Global Action Plan has 15 years’ experience in working to change behaviour, in homes, schools, businesses and the community. Since 1997 their Environment Champions programme has taken this experience and used it to help organisations reduce energy use and waste production in the workplace.

Global Action Plan is an international network of national organisations concerned about the environment, with a focus on people and the practical, everyday action they can take to improve the world for themselves and others. Trewin Restorick founded Global Action Plan UK in 1993, and is currently Director. Global Action Plan UK has over 50 staff, with a head office in London and regional offices in Exeter, Brighton and Nottingham. In 2008/09 it had an annual turnover of about £3 million. 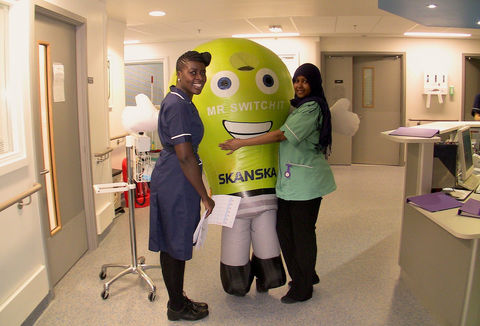 An organisation taking part in the programme puts together a team of about 20 ‘Environment Champions’, ideally from different departments and levels of seniority. A Global Action Plan facilitator conducts a team training session, then works with the team to carry out an initial audit of energy use and waste production, from which an audit report is produced.The team is reconvened for a second meeting to discuss strategies to reduce energy use and waste.

The strategies developed usually require some small physical changes, for example installing low energy light bulbs and providing recycling bins, but the main work is a communications campaign to encourage behavioural change such as switching off lights and IT equipment.

The chosen strategies are implemented for four to seven months, and then a second environmental audit is carried out. Changes in energy use and waste production are discussed with the Champions and the client organisation. As the programme moves forward, the client continues to receive support from Global Action Plan through monthly meetings with the team, and also via email or telephone when questions arise.

Global Action Plan always customises its programmes for the needs of a particular organisation. It is also able to provide advice on specialist issues such as reducing the environmental impact of IT.

The Environment Champions programme was initially grant funded. Global Action Plan now operates it as a commercial service, charging client organisations typically £25,000 for the first year of work. Many clients continue to pay to receive a service after that.

By 2008, the Environment Champions programme had worked with 69 organisations employing 86,000 people, including Investec, E.ON and Britannia Building Society. 52 organisations took part in the waste reduction programme, and 37 took part in the energy reduction programme, which started later. Over 1,200 Environment Champion team members have received training. In an annual survey of its clients’ employees, Global Action Plan found that about 78% of employees reported changed behaviour at work with regard to waste or energy, while about 77% reported changing their behaviour at home.

From the difference between the initial and final energy audits in the 22 organisations for which full data was obtained, Global Action Plan estimates that the programme resulted in savings of over 4.4 GWh/year of energy, or on average about 200 MWh/year for each organisation (this figure includes electricity, gas and other heating fuels) – an average of about 4%.

The carbon savings arising directly from this reduced energy use are equivalent to about 3,100 tonnes/year of CO2, or about 140 tonnes/year per organisation.

In addition, Global Action Plan estimates that the programme resulted in annual reductions in waste of over 1,600 tonnes/year, or about 50 tonnes/year per organisation. About 75% of this is due to reduced consumption, and 25% due to increased recycling.

There are carbon savings associated with the reduction in waste, because energy is ‘embodied’ in the manufacture of products which end up in waste, and landfill also contributes. Increased recycling also contributes to reduced emissions, because less energy is needed to manufacture from recycled materials than from raw materials. Global Action Plan has used materials data from DEFRA to estimate average savings of 4.5 tonnes CO2 per tonne of prevented waste, giving a total of about 9,300 tonnes/year CO2 for the 32 organisations in which full data was obtained, or 290 tonnes/year CO2 per organisation. This is greater than the carbon saving associated with direct energy use, and shows the significance of waste reduction in reducing carbon emissions. However, there is much more potential for further reduction in carbon from direct energy use.

Longer term monitoring has not been possible, but anecdotal evidence suggests that many organisations see continuing behavioural change.

Organisations benefit financially from reduced energy bills and waste disposal costs. For many clients, a Global Action Plan programme also brings significant indirect benefits in the workplace, such as helping staff with teamwork and personal development, and giving them the confidence to challenge bad practice at work when they encounter it.

Global Action Plan is expanding the Environment Champions programme to cover areas such as transport, supply chains and local community engagement. It is also starting to use carbon footprinting as a tool for engaging businesses and their staff.

Demand for the Environment Champions programme has been lower than anticipated, because of the economic downturn. However since 2008, seven new organisations have taken part in the programme, with over 400 new Champions trained. Work has also continued with some existing clients too.

Part of the Ashden Award funds was used to pilot a programme working with IT staff, looking at ways to improve energy efficiency, backed up with the production of an online training pack. The Award also part-funded a programme to encourage emissions reductions through better driving: preliminary results suggest that a one-hour training course can lead to significant cuts in fuel use.