SELCO is a social enterprise providing sustainable energy solutions to households and businesses.

SELCO’s 2005 Ashden Award and 2007 Outstanding Achievement Award recognised its innovation in both developing solar electric systems, and in building links with end-user finance institutions that enable people to buy them.

The solar home systems installed up until 2007 avoid the emission of about 21,000 tonnes/year of CO2 .

Around one fifth of India's population, roughly 250 million people, lives without grid electricity.

"My son comes to visit be whenever there’s a test match on TV, because my solar electricity supply is more reliable than his mains supply in town."

The core business of SELCO is the design and sale of photovoltaic (PV) solar-home-systems (SHS), principally to provide lighting, but also for radios, cassette players and fans. A typical system uses a single PV module to power four 7W compact fluorescent lights (CFLs).  Systems are individually designed to meet the needs (and budget) of each customer. The installation of the system is carried out by SELCO technicians, with great emphasis on getting the details right. Similar systems have been sold to stallholders in street markets. Here, fewer individual lights may be needed, but with higher illumination or for a longer period.

In a typical system, electrical power is generated by a 35 Wp PV module, which is usually mounted on the roof of a house. A 90 Ah lead-acid battery is used for storage, so that the system works both day and night and throughout the year. The batteries used are designed to withstand significant discharge each day without rapid deterioration (cheaper car batteries cannot withstand this, and can become unusable within about six months). An electronic charge-controller protects the battery from charging or discharging too much, allowing the battery to be used for at least five years.

One innovative idea to get the most from a small system is to mount a light in the corner of one room and remove bricks into other rooms, so that a single light provides background illumination in three rooms. Another feature which allows flexibility at low cost is having lights which can be moved from one place to another, and installing the wiring and brackets for six lighting points in a four-light system.

A typical four-light SHS costs about US$420 (Rs 18,000) including design, installation and a one year service contract. In the past there has been a 33% government subsidy, but this has been discontinued, so users now pay the full cost.

Microfinance organisations usually require a small down-payment, followed by instalments of US$7 to $9 (Rs 300 to 400) per month over five years. This level of payment is often affordable from the extra earnings that PV light has brought.  One woman visited by an Ashden judge had increased her production of bidis (traditional cigarettes) from 400 to 600 per day, and her extra daily earnings of US$0.30 (Rs 13) was more than enough to cover the US$7 (Rs 300)/ month repayments on her loan. Other women use the extra time to increase their work and income from tailoring, basket making or betel-nut shelling.

Users have the option of including the cost of a second battery via slightly higher monthly instalments, so that they are not faced with the cost of a replacement battery just when their loan has been repaid. This ensures that the replacement battery is a proper PV battery, rather than a cheaper car battery. It also makes sure that spent batteries are returned to SELCO for recycling.
Street vendors normally use large kerosene pressure lamps. For them the savings on kerosene can repay the loan on a PV system, but they are not used to monthly budgeting. One vendor whom the Ashden judge met thought that he would not be able to manage the bank repayments of US$5 (Rs 200)/month for five years, even though SELCO had helped him to work out that he was saving nearly US$10 (Rs 420)/month on kerosene. So SELCO provided a money box for him to deposit money at the end of each day, from which he makes the monthly payment to the bank. Another way in which systems have become affordable for very poor traders is through PV battery-charging businesses. These charge the batteries during the day, and hire them to traders each night for a rental fee. In this way the trader has to pay only for the CFL, bringing regular payments down to a more manageable level

Many poor households who can afford the monthly loan repayments still find it difficult to save the down-payment. As a pilot, SELCO used part of the 2005 Ashden prize money as a ‘down-payment guarantee’, so that banks were able to loan to customers who could not afford a down-payment. This is proving very successful.

How is it manufactured and maintained?

All the components of the PV systems are manufactured in India. PV modules and batteries are bought in, but SELCO initially had problems with the quality of CFLs, and so set up a sister-business to manufacture both CFLs and charge controllers.

The main work of SELCO is carried out by local service centres, with the aim that all customers should be within three hours travelling distance of a centre.  All installations and user training are carried out by SELCO technicians. Service is free during the first year, and SELCO staff visit each system every three months to make sure that it is working correctly.  All SELCO service centres hold full stocks of spares, so that replacements can be made quickly if there is a problem.

PV modules supplied by SELCO come with a 10-year guarantee and batteries with a 3-year guarantee: any faults are reported to the SELCO head office, which keeps full details of all systems, so that problems with suppliers can be tracked quickly. 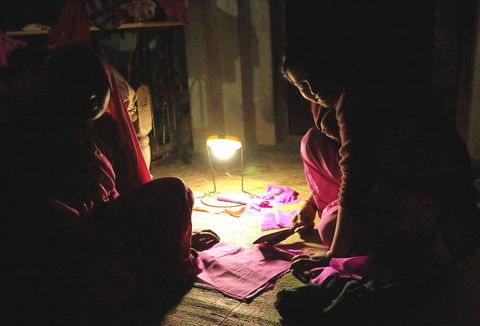 By 2007, SELCO had sold 71,000 solar homes systems, mainly for homes but also for small businesses. Around 0.4 million people benefit from the systems.

The immediate benefit of using a PV system is that the use of smoky, dangerous kerosene lamps is minimised. In addition, owners no longer use and dispose of dry-cell batteries. Families who use kerosene for lighting consume about 120 litres per year, so the systems installed up until 2007 avoid the emission of about 21,000 tonnes/year of CO2.

PV systems provide users with clean, good-quality light and power for small appliances. Children are able to study, domestic tasks are done more safely and easily, and there are increased opportunities for income generation. For vendors, produce from stalls is displayed better, and they do not have to work with the smell and heat from kerosene lamps.
For both homes and street vendors, the reliability of the PV systems is a major benefit. Users remember one or two days each year in the monsoon season where there was not sufficient output, but that is in a region where the mains electricity fails for an average of four hours per day.

SELCO employs over 170 staff, and many stay with the company for a long time, moving up to senior positions. Most staff are based in the service centres and recruited locally, often starting with few qualifications. Some service centres also use local agents who receive a percentage commission for each SHS sale that they initiate. 21% of service centre staff and 43% of head office staff are female.

Many of the benefits of the work of SELCO are particularly significant for women: they often spend more time in the home and therefore appreciate the improved light and income generation opportunities. Many women take the responsibility of paying for the SHS, and through this gain confidence in financial management.

Winning an Ashden Award in 2005 and the Outstanding Achievement Award in 2007 raised the profile of SELCO (and the potential for PV) with banks and microfinance organisations. One of the most significant was a partnership with the Self Employed Women’s Association (SEWA) bank in Gujarat, which has 300,000 female customers. SELCO has started to open service centres directly linked to SEWA bank branches. These provide other energy services such as efficient stoves in addition to PV, and other SELCO branches are starting to do the same.

One of the limitations to the growth of SELCO was access to capital, and part of the Ashden funding was used to prepare a business plan. Significant investments were secured from three socially-focused finance organisations (e+co, the Lemelson Foundation, and Good Energies) so SELCO now has the finance to grow substantially.