SITMo is providing micro-hydro power to very remote village communities in the Philippines.

Deforestation and abandonment of the rice terraces on the hillsides of Ifugao Province in the Northern Philippines has led to local erosion and increased flooding in the plains. SITMo has introduced electricity into the region via micro-hydro schemes, providing light and power, raising living standards and encouraging people to stay and farm in these remote villages.

Studies suggest 32 tonnes/year of CO2 are saved by the reduced use of kerosene lamps.

The Dragonfly micro-hydro system produces up to 50 kW and can be used to drive coffee or rice mills, or to generate electricity.

Electricity gives better quality light for studying and for crafts such as basket weaving and broom making.

"People love having light for the evenings, and now that they have found it’s cheaper than the mains supply and more reliable too, it’s becoming increasingly popular."

Ifugao Province in the Northern Philippines, its lush hillsides circled by ancient rice terraces, is beautiful. It is also remote and poor. It lacks reliable electricity. Its young people are leaving. The rice terraces are being abandoned. Loggers have moved in, bringing deforestation and increased risk of flooding.

Save the Ifugao Terraces Movement (SITMo), a local NGO, knew that people would only stay in the region if it offered them a decent living. Power supply was the key. And in the many irrigation channels around the hillside SITMo had a ready-made solution: hydro electric power.

Three different-sized turbines were developed. The existing irrigation channels could be used for water supply, which limited cost and environmental impact. The cost of the turbines is paid for by government and international donors, but villagers pay for the connection. This usually costs around US$130 with villagers paying via a credit scheme arranged by SITMo’s parent NGO. Crucially SITMo uses a community-based model when working in villages, working through local organisations to transfer knowledge and enable ongoing maintenance.

The turbines provide electrical power for lighting, televisions and radio. But they also provide more regular light and power for studying and craft work such as basket weaving. The larger turbines enable small businesses to use power tools and farmers to use electricity for milling rice and coffee – the milled product has twice the value.

Alongside benefits to the population are benefits to the environment. Studies suggest 32 tonnes/year of CO2 are saved by the reduced use of kerosene lamps. And SITMo is not only reversing depopulation. Trees are being planted to reverse deforestation. Both people and environment are being encouraged to stay.

In most villages, the water to drive the turbine is taken from existing irrigation channels, which keeps construction costs low and minimises environmental impact. Water flows through a steep pipe, the penstock, to the turbine house. All the systems are manufactured within Ifugao province.

The Firefly is the smallest system with a rated output of 100 W. It has a crossflow turbine with a runner of approximately 75 mm diameter, coupled to a vehicle alternator. Water to turn the runner is carried by a 750 mm diameter pipe, through a head of between 5 and 20 metres. The flow rate of the water is up to 8 litres per second. Firefly systems charge batteries to run home lighting systems and radios.

The Butterfly system was developed by a local farmer, Louis Cabbigat. The turbine which is a hybrid of an axial pump and a Francis turbine, has an output of 3 kW of electrical power, generated at 220V AC and supplying power via a mini grid to 28 households.

The Dragonfly is a scaled up version of the Firefly. A similar design of crossflow turbine is used but with a runner of approximately 300 mm diameter. The blades of the runner are made from standard pipes which can be welded in simple metal workshops. The two earliest Dragonfly systems were used to provide mechnical power, for coffee and rice milling. The Dragonfly can also be used to generate up to 50 kW of electrical power at 220V ac, which can supply a local village grid.

The capital cost of the larger systems is between US$400 and US$2,000 per kW (58,800 to 94,000 PhP). Households who benefit either paid about US$20 (940 PhP) or contributed labour towards the construction of the turbines and civil works. Each household has to buy their own home electrical system at a cost of about US$35 to US$40 (1,600PhP), and pay a monthly flat rate electricity fee of about US$0.20 (9 PhP) for each socket or lightbulb in their home. This fee contributes to the maintenance of the turbine.

How is it maintained?

SITMo and the PRRM always use a community-based model when working in a village, where possible working through an existing people’s organisation. This organisation is responsible for planning and decision-making, organises the manufacturing and installation of the hydro equipment, and has training in basic maintenance. PRRM and SITMo staff provide guidance and technical input. The significant involvement of local people during the manufacture and installation of a system means that the users know how to operate and maintain it.

The SITMo micro-hydro projects have provided electrical power for lighting, radio and TV to about 160 families in eleven villages.

A 2001 study by SITMo showed that an average rural household used about 9 litres of kerosene for lighting, and therefore produced about 280 kg/year of CO2. SITMo estimates that the micro-hydro systems displace about 75% of kerosene use, so the total saving is about 32 tonnes/year of CO2.

Although a small number of households had previously used diesel generators, the majority relied on kerosene lamps for lighting, with the associated indoor air pollution and risk of houses burning down. Electricity gives better quality light for studying and for crafts such as basket weaving and broom making. It is particularly appreciated for communal functions such as weddings and village meetings, and gives a feeling of modernity in the village. The benefits of electricity are a key factor in discouraging young people from migrating to the towns.

The Butterfly and Dragonfly schemes have enabled the use of electrical equipment in small businesses, bringing increased opportunities for income generation. For instance, a blacksmith using an electric fan instead of manually-operated bellows can make more agricultural tools. Wood-carving businesses have benefited from being able to use small power tools, a local telephone system can operate reliably, and shops can display goods better under electric lights.

About 30 families benefit from the micro-hydro mills through increased profits from selling processed crops, without the considerable time needed to pound rice and coffee by hand. Farmers are paid about US$0.85 (PhP 40) per kg of milled coffee, compared with only US$0.40 (PhP 20) for raw beans. They are also able to transport more coffee to market per journey, because of the higher density of the milled product. 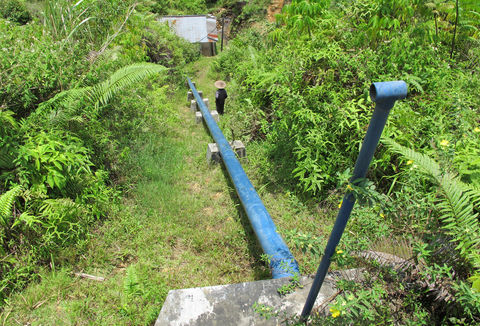