In Ethiopia, the main sources of light in rural homes and small businesses are dim kerosene lamps and candles, which emit fumes and can lead to health problems.

"The solar light is like gold. Before, using firewood and kerosene, I’d have to blow my nose all the time because the gas was suffocating me. But now I live in peace and I’m happy."

In Ethiopia reliable electricity supplies are unavailable to many rural and semi-urban dwellers. The main sources of light in homes and small businesses are kerosene lamps and candles. These emit fumes which can lead to eye and health problems for the users, and the low levels of light cause eye strain.

The Solar Energy Foundation developed high-quality solar-home-systems and solar lanterns to replace kerosene lamps. In 2005, a small trial of 30 systems was started in the Ethiopian village of Kechemober, 240 km north of Addis Ababa. Representatives from Rema, about one hour’s drive away, came to see the systems. Rema had been offered a diesel generator by an NGO, but villagers were reluctant to accept the offer because of their concern about the running costs, particularly the cost of diesel fuel. The visitors were very impressed with the solar systems, as a result of which the SEF drew up a programme to install, maintain and finance SHS in the village of Rema.

The Solar Energy Foundation is a not-for-profit organisation, founded in Germany in 2003 by the current director Dr Harald Schützeichel. The country representative Samson Tsegaye, manages operations in Ethiopia. In 2008 the SEF had a turnover of about US$1.2 million and 35 staff. An associated company, SunTransfer, sells solar products on a commercial basis in the Philippines, Kenya, Uganda and elsewhere, and the profits from this help to fund the work in Ethiopia.

An SHS consists of a PV module, which generates electricity from sunlight; a rechargeable battery, which stores electricity so that it can be used during both day and night; a charge controller, which prevents the battery from being over-charged or deep-discharged; lights; wiring and fixtures. The basic ‘SunTransfer 10’ system developed by the Solar Energy Foundation uses a 10 Wp PV module and an 18 Ah maintenance-free gel type lead-acid battery. This combination is designed to provide light for a minimum of four hours per day, with the possibility of connecting a radio or music system for short periods as well. The battery is expected to last for five years if used carefully. The PV module and charge controller are expected to last more than 10 years.

SEF has also installed a solar powered water pump in Rema, to provide fresh drinking water to the village. Previously the only supply was from a source about two hours’ walk away. There are two sets of taps in the village where people can collect water twice a day, for a small charge.

Each SHS costs about US$260 (3,000 ETB), including manufacture and installation. The capital cost of the systems installed in and around Rema were financed by donor funds. Households must pay a monthly fee of about US$1 (12 ETB), to cover the cost of service by local technicians and replacement parts such as the battery and LEDs. An outline agreement on charges and conditions was set up between the village administration and the SEF, and each household has its own contract. 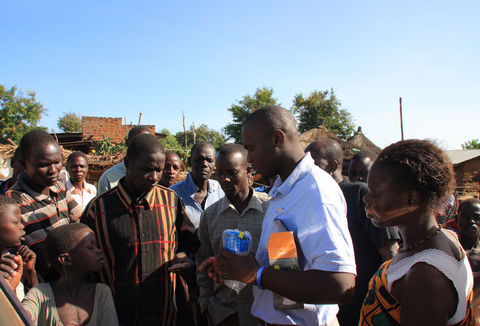 Payment is managed by a village committee. Households have a period of three days in which to pay their monthly fee to a fee collector. If they do not pay within this time, then the system will be shut down remotely by a technician and reactivated only when the fees are paid, although in practice this rarely happens.

Individual SHS components are imported and then assembled in the locally-made box Ethiopia, where quality checks are carried out. Each system has a reference number, which is recorded both on the box and over the door of the house where it is installed. There have been only minor problems with the units installed to date, and these have been easily rectified by the technicians in the village.

SEF has set up an International Solar School in Rema in order to provide a supply of welltrained solar technicians to maintain the systems. The six-month training course covers solar theory, business management and work experience.

Householders are shown how to use their systems when they are installed and, as part of the contract, they have to confirm that they understand the instructions and the rules for use. Instructions are also painted on the battery box both in written and picture form. At the end of the installation work, each family receives their own user manual and record book to keep details of the equipment, repairs and payments.

By the end of 2008, about 2,130 SHS had been installed by SEF: 30 in the original demonstration, and 2,100 in the village of Rema and nearby areas. With an average of five people in each family, it is estimated that over 10,000 people are now benefitting from these systems.

Replacement of kerosene lamps for lighting saves about 70 litres/year of kerosene per lamp, equivalent to about 0.19 tonnes/year CO2. A survey in Rema suggested that households were using about 1.6 kerosene lamps on average. Thus for the 2,130 SHS installed by the end of 2008, the total saving of greenhouse gases is over 650 tonnes CO2/year.

Previously dry cell batteries were used to power radios and music players. The disposal of the spent batteries is a problem, since they are often simply thrown into the streets. Radios and, to a limited extent, other equipment can now be powered by the SHS, which reduces the problem of disposal.

There is a real sense of pride in the Rema communities that they have rejected the option of a diesel generator, going instead for a more modern approach with solar lighting.

They (the children) get everything they need through solar energy. They do their homework, they can meet up with their families in the evening and they have free time to play and relax. Because of solar energy, the number of educated people here is increasing.

Health benefits arise from eliminating the smoke and fumes from kerosene lamps and candles, that previously caused eye and other problems. In addition the low level of light from the lamps made close work difficult. Now there is no risk of burns from touching kerosene lamps (a particular problem for children) or from house fires when lamps or candles are knocked over.

Having adequate lighting in the homes now allows children to study and complete their homework in the evenings, and school grades have improved. A night school has been set up by the Women’s Association in Rema to tutor adults who received little or no schooling, thus improving literacy.

The solar-powered water pump has also given villagers easy access to clean drinking water, without the need for a long walk to collect it.

The programme has provided a range of employment for both men and women. Thirty technicians, including five women, have now been trained in the Solar School and are employed by the Foundation. There are nine fee collectors in Rema, including one woman. The monthly payment they receive is similar to the daily wage for a labourer, and is a useful addition to earnings from other work, such as running a shop. Three administrators handle the money. In addition, many people in the village benefit from increased working hours, including shopkeepers, tailors and craft-workers.

Old ladies, pregnant women and women with new babies can all get water on their doorsteps. Previously we had to fetch water from far away at the river and wait in line. But now that we get water right here, it’s a huge benefit.

The SEF estimates that out of approximately 13 million households without electricity in Ethiopia, about 10 million have sufficient income to pay back a loan on an SHS. Many of them live in closely-knit communities where the approach used in Rema is replicable. The 2,100 installations in Rema and the surrounding area could form the starting point for a national programme to install SHS.

By mid-2009, four new Solar Centres had been set up by technicians trained by the Solar School in different parts of Ethiopia. Each centre will operate as an independent franchised business, with initial capital to set up a revolving fund for purchasing equipment provided by the SEF. More Solar Centres and local manufacturing of components are planned.