Burning wood and other biomass can be dirty and dangerous for people and their planet. It can also be expensive. Yet for many small businesses like silk-reeling and food processing in India, biomass is the only way to produce heat. What can be done?

The solution that the NGO Technology Informatics Design Endeavour (TIDE) came up with is a clever combination of technology and sound business sense. Technology has developed a safer stove burning less fuel and generating less pollution. Business sense has not only demonstrated the cost-benefit of the stoves, but trained a network of entrepreneurs who both sell and develop them to suit different industries.

"People didn’t like coming to my restaurant because it was too hot and smoky. Now I get twice as many customers, because they can eat in a clean atmosphere."

The widespread use of biomass for cooking in developing countries, and its associated problems for the environment and health, is well documented. What is less well known is how many businesses also rely on biomass. In South India alone, it is estimated that eight million people work in small and tiny businesses where wood and biomass is the source of process heat. These businesses include food processing, preparation of ayurvedic medicine, textiles, and brick, tile and pottery making. Most operate with low overheads, so fuel efficiency has not been a priority. This use of fuelwood by businesses has contributed to de-forestation which is a major problem, especially in the steeply sloping Western Ghats, an ecologically sensitive area and a major biodiversity hotspot.

TIDE has developed a programme specifically to improve the efficiency of biomass use in small and tiny businesses, initially in the states of Karnataka and Kerala, but now expanding into Tamil Nadu and Andhra Pradesh.

Technology Informatics Design Endeavour (TIDE), established in 1993, is a not-for-profit organisation which seeks to apply appropriate technology to rural situations. It works through a network of extension agents who learn about a new technology from TIDE and then set up a business to manufacture and market this technology in a particular area.

Although the basic concepts behind each stove design are the same, TIDE develops each stove specific to its sector of use, based on a survey of need and current usage, and with users involved in the detailed design. Improved efficiency is achieved through better heat transfer and combustion of the fuel, and improved insulation minimises the heat losses. All stoves incorporate chimneys to take smoke away from the users, producing a cleaner and safer working environment.

In most sectors, wood was the main type of biomass used before the introduction of improved stoves, and still is. However, some sectors are making increasing use of biomass residues. For example, most areca nut processing businesses use areca husk with the improved stoves. Users in other sectors also burn agricultural residues, briquettes and even cardboard at times. Some food retailers have switched from using LPG stoves to improved biomass stoves, because of the rising price of LPG. 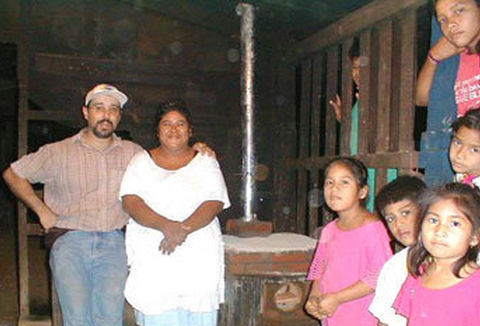 TIDE will develop and commercialise a biomass heating system only if it is affordable without subsidy in the industry for which it is designed. Some initial designs have not been taken further, even though they were technically successful, because the cost was too high.

Customers pay the full price of the stove. Normally a deposit is required on order, with a further payment when the construction starts and the balance on completion, although some entrepreneurs are prepared to delay the final payment. Industries using several heating units will often replace one at a time, and thus spread the capital cost over a period.

TIDE has arranged loans through financial and industry associations for the areca stove purchasers. However there has not been a wide uptake on loans, because the stoves are affordable without them and many people are cautious about using credit. Occasionally a subsidy may be available for a particular industry.

The stoves are manufactured locally, in the town nearest to where they are to be used, using as far as possible locally-available materials. For most stove designs, TIDE has worked with small-town fabricators such as masons (for mud and ceramic parts) and smiths (for metal parts). Usually large equipment (lie dyeing vats) is constructed on site by masons who source the components from local fabricators, while smaller equipment (like silk-reeling stoves) is designed as a set of components for on-site assembly. The stoves are expected to last for about four to five years.

TIDE has started to adapt certain designs for prefabrication in production centres, to speed up production and help with quality control. This has worked successfully for the manufacture of efficient wood-burning water-heaters, where one producer can now manufacture and install over 300 per year. A biomass drier is also now factory manufactured.

TIDE trains extension workers, sometimes university graduates, to become private entrepreneurs and take the stove technology into new areas. Entrepreneurs must offer a one-year warranty for the equipment they have installed. Following this, they carry out servicing and repairs on a chargeable basis, and also follow-up customers informally to check that equipment is working. The entrepreneurs must keep detailed records of where stoves are installed and provide TIDE with this data. TIDE makes random spot checks on its own systems and those installed by entrepreneurs, and finds that they are generally working well.

By the end of 2007, 10,500 biomass stoves or other heating appliances had been supplied by TIDE and its network of entrepreneurs, mainly in the South Indian states of Kerala and Karnataka and to a small extent in Tamil Nadu and Andhra Pradesh, benefiting around 110,000 workers.

TIDE has developed an accounting methodology for assessing biomass savings. This is based on efficiency testing done by the Central Power Research Institute of the Government of India, and user surveys. On average, the stoves save at least 30% of biomass use, although in some sectors the savings are higher – 40 to 50% for textile stoves and community cookstoves, for example. TIDE has the technical capacity to design stoves which save more biomass, but promotes only those designs which are affordable and acceptable by users, so there is often a compromise on efficiency.

Worker in the dying business

By the end of 2007, TIDE estimates that the stoves installed were saving 43,000 tonnes/ year of biomass. These savings in the use of biomass represent a significant reduction in the emission of greenhouse gases, because surveys indicates that wood production in Karnataka and Kerala is largely unsustainable. TIDE estimates that the greenhouse gas saving from the stoves in use at the end of 2007 is about 77,000 tonnes/year CO2.

The environment for the workers directly using the stoves is healthier, safer and more comfortable. Smoke is largely removed by the stove chimney, reducing the risk of respiratory and eye diseases. The insulation around the stoves means that they are cooler to touch, and this reduces the risk of burns. The working environment does not get so hot, which is a real benefit for workers in the tropical climate of South India. These benefits are similar to those experienced with improved domestic stoves, but may be more significant because workers in small industries often work directly with a stove for eight hours per day or more, and the power levels are higher.

Owners of small businesses say that the main advantages of the improved stoves are saving money and improving productivity.

An assessment carried out by TIDE at the end of 2006 suggested that the stoves then in use were saving users US$1 million (Rs 39 million) per year in fuel costs. Since then the cost of wood, and thus the savings, have doubled, For example, the owner of a silk-reeling stove now saves about US$125 (Rs 5,000) per year on wood, and can pay back the cost of the stove in less than six months.

There are three types of benefits:one, there is no smoke, two, they are able to get hot water faster and so their work has  improved, and third, the drudgery in terms of feeding wood into the oven is now reduced.

Productivity is improved because the stoves generate more heat and retain it. For example, the improved areca nut stoves can process four batches per day, instead of two. Increased productivity increases the profitability of the enterprise, and may also bring direct benefits to those whose wages are based on the amount of output they produce (for example silk reeling).

TIDE has directly generated employment. In 2008 14 entrepreneurs trained by TIDE were running businesses, which together employed about 40 skilled and 90 semi-skilled workers.

In 1998, TIDE conducted a survey of small businesses in Karnataka and Kerala and in these two states alone identified about 125,000 industries using an estimated 3 million tonnes/ year of biomass. There is therefore still a huge potential for TIDE for grow, and for its work in both technical innovation and business extension to be replicated throughout India and elsewhere.

Constraints on growth and replication include finding and training the right people to become entrepreneurs, and having sufficient resource to develop new technologies, given that a specific stove is needed for each type of industry.

By the end of 2009, TIDE and its entrepreneurs had supplied 11,840 small business stoves, 7,000 domestic stoves and 200 1–5 kW hydro-power plants, which together represented wood savings of nearly 65,000 tonnes/year and 116,000 tonnes/year avoided CO2 emissions. Nearly 121,000 people are now  benefitting from the stoves. Using part of the 2008 Ashden Awards prize money, TIDE has been able to offer existing entrepreneurs marketing budgets to publicise their work.

At first we didn’t bother with the new stoves but we were encouraged to apply for them. There’s a big reduction in wood use and it’s easier to work with. Time has been saved. I only use 25% of the wood now so I’ve made a lot of savings.

Non-profit organisations in India face restrictions on engaging in commercial activities. After winning the Ashden Award, TIDE therefore worked with support from GVEP International, Arc Finance and the Awards team to prepare a business plan and establish a for-profit company, Sustaintech. This will sell energy efficient stoves and water heaters to small businesses in India, and donate profits back to TIDE. Sustaintech was identified byNew Ventures India (NVI) as one of the best new green business ventures in India, and was offered financial mentoring services by NVI and introductions to potential investors. Significantly, since the Ashden Award to TIDE, there has been greater acceptance of the value of the stoves for small businesses, particularly at government level. The Ministry of New and Renewable Energy is introducing a national stove programme to make efficient stoves more widely available.