It is sometimes hard to know where to start when it comes to saving energy, sustainable transport or local food production.

Transition Together (T-Tog) tackles this by bringing together groups of neighbours who study a workbook over a period of months, and take action to reduce their use of energy, water and oil-powered transport, while also producing local food and installing solar PV to generate electricity.

Average reduction in CO2 emissions of 1.27 tonnes/year per household

"I was already familiar with the content of Transition Together, but meeting as a group was the catalyst to get people building a community and taking action."

Since the oil shocks of the 1970s, and more recently the growing awareness of the risks of climate change, there has been significant progress in using technology for improving energy efficiency and generating energy from renewable sources. But despite this progress the UK’s energy use and CO2 emissions have not fallen significantly, and have actually increased once the energy ‘embodied’ in imported goods is taken into account. Policymakers and campaigners have come to the realisation that behaviour change is needed to achieve the reduction in energy use that is required over the next few decades.

Behaviour change can include many things, from turning off lights and walking to the shops to installing insulation and avoiding long-distance travel, but actually making it happen is challenging – as long as people don’t see the need to change behaviour, they are unlikely to do it. At Transition Town Totnes (TTT), the Transition Together (T-Tog) project was set up to tackle this, by engaging households and motivating them to take action.

The idea of a ‘Transition Town’ was originally developed by Rob Hopkins in Kinsale, Ireland. A Transition Town is a community-led initiative to prepare for a future with less oil, a changing climate and increasing economic uncertainty. Hopkins moved from Kinsale to Totnes and, with Naresh Giangrande, developed the concept further in 2005, launching TTT in 2006. TTT shares an office with the Transition Network, which supports the growing number of Transition Towns across the world.

TTT has four FTE paid posts at present, over 100 active volunteers and last year had an income of £723,000 (including a one-off grant of £625,000 from DECC). To achieve the goal of preparing the town for the future impacts of climate change and reducing supplies of oil, a wide range of projects are in progress, covering everything from local energy generation and building sustainable housing to local food production and transport.

Saving money is the incentive to keep taking the actions to save energy.

Member of the Collapark and Collins Road group 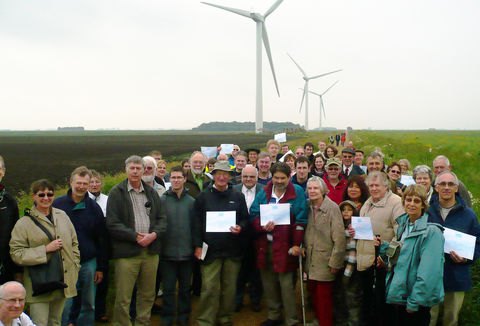 T-Tog brings together small groups of neighbours, typically six to eight households, to meet and discuss sustainability issues and decide what steps they can take to make their lifestyles more sustainable. Each group meets seven times, with a few weeks between meetings, and tend to take turns hosting meetings in the members’ homes. TTT has marketed the course to residents in the town and surrounding area, but groups are often formed when one interested person gets in touch and sets about recruiting their neighbours. An added incentive to sign up during 2010 was that participants could qualify for entry into the Transition Streets project, through which they could get a grant towards solar PV installation if their house was suitable (funded by the DECC Low Carbon Communities Challenge). However, what motivated most people to sign up was to get to know their neighbours and to reduce their carbon footprint.

Once a group has formed, T-Tog sends a facilitator to their first meeting to explain the process, give members a copy of the workbook and help them agree any rules the group will keep to. During the first meeting the group also completes a survey to review what actions they are already taking to make their lives more sustainable. In subsequent meetings, the group studies the chapters of the workbook, including:

Each chapter in the workbook starts with background information on the environmental and financial cost of the subject, and then looks at the different ways these impacts can be reduced. The majority of actions are no-cost, low-cost or grant-supported to help ensure that money is not a barrier.

A strong emphasis on financial savings helps group members to see the positive side of taking the actions that are suggested. At the end of each meeting, the group decide on any individual or group actions they are going to try and start taking. In the final meeting, the group members fill in an evaluation of the actions they are now taking, which can be compared to the survey they completed at the start of the programme to find out whether behaviour has changed or not.

T-Tog participants pay nothing to join the programme, but are invited to make a voluntary donation of £10 to cover the cost of the workbook, allowing future groups to be set up without any initial charge for joining. Participants do have to pay for any technology that they decide to use, although partial grant-funding for insulation was available through Cosy Devon. Allowing for the cost of developing the T-Tog programme, the cost per household to TTT to date is about £72. The incremental cost for new groups is under £25 per household, allowing for support from a facilitator and administration overheads.

What are the outcomes?

Because T-Tog groups are run by the members, with the facilitator only present for the first meeting, they are a friendly and non-threatening environment in which to learn. The group members are free to decide which of the suggested actions they try, leading to a positive attitude towards changing behaviour. Learning from other group members is also an important feature, as most people have some experience or information that will be helpful to others. The groups foster a sense of ‘doing this together’, rather than each member having to find out the information on their own and motivate themselves to take action – peer support is important in the behaviour change process.

The energy-saving changes people made include the following, in order of decreasing carbon impact:

In addition to looking at the behavioural changes occurring, the success of the groups can also be seen by the fact that many of them continue meeting after completing the T-Tog programme, and are looking for new activities to do together. This is important because behavioural changes to save energy can easily lapse over time, and having a friendly peer group supporting each other to maintain the changes can help avoid this. As a result, T-Tog participants report that they expect the behavioural changes to last for a year or more. Another outcome is that T-Tog participants have started getting involved in other projects at TTT, boosting sustainability work in the town and strengthening the community.

By April 2011, 56 T-Tog groups had run, involving 468 households and about 1,100 people. 42 of these groups also participated in Transition Streets, and in total 142 households have had solar PV systems installed. It is important to note that although the chance to get grants towards installing solar PV encouraged people to sign up, those who did not qualify for it still continued with the T-Tog programme, due to the social and financial benefits.

The group made us aware of what changes we could make, then each person can make decisions about what’s right for them to do.

In a follow-up survey of the T-Tog groups, to which 63 households responded, over 80% had made new energy saving or generating improvements to their home as a result of the programme, and over 85% had changed their behaviour to save energy (some were already doing everything they could). By reviewing the surveys completed at the start and end of each T-Tog group’s series of meetings, TTT estimates that the programme so far has resulted in a reduction in CO2 emissions of 1.27 tonnes/year per household, equivalent to almost 600 tonnes/year in total over all participating households. About half the reduction is due to reduced energy use in the home, and about a quarter due to changes in transport use, with the remainder coming from changes with regard to food, water and waste. This does not include savings from the solar PV installations. There have also been environmental benefits from reductions in water use and increases in organic and home-grown food.

The social benefits of T-Tog are one of the main factors in people signing up to the programme – building relationships with neighbours was the top reason people gave for having joined, and over 70% of those surveyed said that this had definitely been achieved. The second most important aspect for people was doing something positive about climate change and other environmental issues that concerned them, and 55% felt this had definitely happened, with the other 45% saying it had happened to some degree.

One of the key marketing strategies for T-Tog was that by saving energy participants could save money, and over 60% of those surveyed had seen a reduction in costs already. Households are estimated to be saving an average £570/year as a result of the changes they have made to their behaviour and their homes. The recruitment strategy for T-Tog ensured that at least 30% of the participants were low-income households. This will have reduced the risk of fuel poverty amongst participants, enabling them to keep their homes warm enough during winter to avoid health problems caused by cold and damp.

The household savings on energy, combined with the feed in tariff income from the solar PV installations, represent a significant boost in income for the town, which will help strengthen the local economy. The programme itself has also provided part-time work for facilitators and a project director.

TTT as a whole has a strong focus on making the local economy more resilient to energy price shocks, and T-Tog is helping in this not just by reducing energy demand but by recruiting new members of the community to the Transition Town movement. Many participants had not previously been involved with any of the Transition projects in the town, but through T-Tog they have now been introduced to the concept and some are joining in with the other projects, helping build momentum for the work.

T-Tog is open to new groups wishing to start up, and TTT is currently seeking funding for another marketing push to recruit new households not just in Totnes itself, but also in the surrounding area. T-Tog has so far reached 12% of households in Totnes, or 5% if the surrounding area is included, but because of the success of the programme the target has been raised to 20%, which new funding will help it achieve. There are also plans to develop more chapters for the workbook in response to requests from participants, possibly covering finance and economics.

T-Tog is also being replicated in other Transition Towns – the initial funding for the project allowed some support to be given to the first ten that started replication, and a further twenty are now also interested. Because the programme is based around self-organising groups of households, it is in theory replicable anywhere in the UK, and in other countries too. In practice, it works best in communities where there is already some level of environmental interest, as this makes the marketing easier. A minimum level of funding is required to provide materials, facilitation and administration, and hopefully many organisations, particularly those in the public sector with an interest in delivering carbon savings and building community cohesion, will recognise this as a relatively low-cost way to deliver carbon savings and build a foundation for future projects in communities.