Small solar home systems bring good quality light and phone-charging to off-grid households and save them money. Yet their upfront costs render them out of reach for the people who would benefit most from them.

UK-based startup Azuri has developed a pay-as-you-go interface which allows households to pay for solar power as they use it with scratchcards, making them affordable to those who need them.

2,400 systems had been installed and activated

"Azuri has created an innovative and culturally appropriate product that also overcomes the huge hurdle of the high upfront costs of solar power."

The price of small solar systems for off-grid homes in East Africa has fallen rapidly over the past decade. Just six years ago, a two-light system would have cost over US$200, but good quality systems are now available for under US$70. However, this price is still too high for most off-grid households to pay upfront. It would be affordable for many more people with suitable financing to spread the cost over a year or two, but microfinance to do this is often not available. UK technology innovation company Eight19 came up with an innovative way to spread the cost of a solar system – a pay-as-you-go controller that is activated by weekly scratchcard payments.

Eight19 developed, patented and piloted the pay-as-you go technology under the brand name Indigo. It launched Azuri Technologies as a spinoff in August 2012 to promote this and other technologies at scale in Africa and elsewhere in the developing world. Azuri is funded through commercial investment and currently (April 2013) has 10 staff. Azuri recently secured US$3.7m loan and grant finance for working capital, which will enable rapid growth.

Azuri produces complete solar home systems that incorporate Indigo pay as-you-go controllers. It sells the systems, and the scratchcards that activate them, to partner dealers in developing countries. The dealers are responsible for installing systems, selling scratchcards, and providing after-sales service in their local area, working to Azuri specifications. Online records are kept of all sales and scratchcard activations, so that both Azuri and the local dealer can track progress. 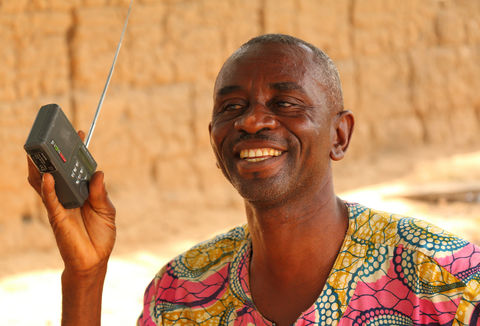 A solar home system uses a photovoltaic (PV) module and a rechargeable battery to provide power for lights and other low-power uses. The Indigo Duo solar home system has a 2.5 Wp PV module and a long-life 3.3 Ah Lithium Iron Phosphate battery, and is supplied with two 60-lumen LED lights. The battery and Indigo controller are housed in a distinctive bright yellow case with a keypad on the front, along with sockets for the PV module and lights, and a USB socket for phone charging. The packaged system also includes a bunch of common phone-charging plugs which connect to a single USB plug.

The Indigo pay-as-you-go controller allows power to the sockets only when the system has been unlocked by entering a valid code on the keypad. The code is obtained by sending a scratchcard number along with the serial number of the Indigo unit by SMS to an Azuri in-country gateway that relays the information to the Azuri central server. A return SMS then provides the code. ‘Scratchcards’ are either physical cards bought for cash, or scratchcard numbers bought by mobile phone, using a mobile money system. They can be purchased for one-week or four-week activation.

The Indigo controller is manufactured to Azuri specifications in Malaysia, and assembled with the other components (sourced on the world market) into a complete system, which is boxed for shipping. The system meets Lighting Global quality standards, and Lighting Africa performance targets.

Users pay an initial fee of about US$10 to have the Indigo Duo system installed in their home, and about US$1.50 for each weekly scratchcard. Dealers sell scratchcards directly to customers, but also work through local resellers so that all customers have easy access to top-up facilities.

After 80 payments, users can pay a fee of about US$5 to have their system permanently unlocked. Alternatively they will soon be able to trade up for a larger system and continue weekly payments. Azuri’s vision is an ‘energy escalator’ where customers can gradually increase their uses of electricity through trading up to successively larger systems.

How is it promoted, maintained and monitored?

Azuri provides detailed specifications to its in-country dealers on how Indigo systems should be marketed and installed, and what level of service and support must be provided. Dealers are also provided with distinctive branding for shops and advertising.

Systems have to be installed by an Azuri-trained technician, to ensure that the installation is done correctly (Indigo box mounted out of reach of children, lights cabled to the two selected locations, PV module fixed securely on the roof and unshaded) and also that the owner understands how to top up and use the system. Getting all this right at installation avoids problems for the owner, and also for the dealer who is responsible for support and repair under warranty for the first year.

The cloud-based Azuri database stores details of each customer and their Indigo system. Each scratchcard that is sold to a dealer is also recorded, and the date of redemption and the system on which it is used is automatically added to the database. This means that both Azuri head office and the local dealer can keep track of customers. The close local network of dealer, installers and scratchcard resellers, coupled with the detailed database records, means that any problems are quickly identified and dealt with.

After the initial development of the Indigo controller, a pilot sales programme of Indigo Duo systems was undertaken in partnership with SunnyMoney and local dealer Mibawa near Kitale in western Kenya in 2011. This confirmed that the technology and the scratchcard payment system were popular with potential customers, and identified minor improvements to incorporate in commercial-scale production.

Commercial sales started in 2012, and by the end of March 2013 about 5,000 systems had been delivered to dealers and a further 6,000 were in manufacture. Already 2,400 systems have been installed and activated and, with typically five members per household, around 12,000 people benefit.

Indigo systems are very popular with owners, and people find them easy to use. The scratchcard payment system works well, and payments are lower than the cost of the kerosene and phone charging that the Indigo replaces. Even though incomes from farming and casual labour are unreliable, people can afford to activate their systems for four weeks out of five on average. Many of the households with Indigo systems are remote from the grid, and even where it is available the cost of connection (US$500 or more in rural Kenya) would have been completely out of reach for them.

The Indigo lights are attractive: owners can chose where they are installed, and usually have one in their living room and one in a bedroom. Azuri claims that the Indigo Duo will provide at least seven hours of illumination for two lights each night, but most users near Kitale who spoke to the Ashden assessor had found they could get longer than this. Parents were glad that their children had light to read and study, and children liked to be able to see what they were doing in the morning and thus get to school on time. People have started to innovate with their systems – for instance, installing three lights in different parts of the house and plugging in whichever two they need at a given time.

Most Indigo users previously relied on kerosene for lighting: a pilot survey for Azuri found that all households reduced kerosene use when they owned an Indigo system, and about 9% stopped using kerosene lighting altogether. Reducing the use of kerosene lamps cuts the damage to health from air pollution. It also cuts the serious risk of house fires that occur when kerosene lamps are knocked over.

My children are two and three years old, and they can’t remember the time before we had Indigo lights. They get really cross with me if I forget to top up our Indigo.

Mobile phones are widespread in Kenya, and off-grid households spend both money and time to keep their phones charged. Phone charging with an Indigo system at home is therefore very welcome, and avoids the cost and time of taking a phone or phone battery to a charging shop. Some owners earn money through charging neighbours’ phones, and a future Azuri technology will be targeted at small phone-charging businesses.

The Azuri distribution chain contributes to the local economy through income and employment, not just for dealers and installation technicians, but also for scratchcard sellers. The local dealer in Kitale, Mibawa, has a network of over fifty subdealers, installers, and scratchcard sellers. This contribution to the local economy will continue as people upgrade their systems.

Now that we have lights I can see what I’m doing in the morning, so I’m not late for school any more.

Selling solar home systems requires significant working capital – and selling them on a pay-as-you-go basis locks up that capital for a long time. So, despite clear user demand, the growth of Azuri was until recently constrained by working capital. But loan finance (US$1.7m from Barclays and US$0.75m from the AECF) and US$1m of grant finance have greatly eased this constraint, and Azuri is scaling up rapidly. In addition to nearly 6,000 systems currently in manufacture, a further 33,000 have been ordered so far for delivery during 2013. These will lead to significant Azuri operations in South Africa, Zimbabwe and Uganda as well as Kenya, and initial activities in several West African countries as well.

New system designs will soon be piloted too. The next flight of the ‘energy escalator’ will be the 5 Wp Indigo Quad system, giving four lights, a USB port, phone charging leads and a radio. An alternative for people wanting to set up a small phone-charging business will be the Indigo Mobi, a 30 Wp system providing eleven USB ports.