Broad pledges and decade-away targets are not enough

Ashden transport awards: can world back up plans to ditch fossil fuels? Applications are open for Ashden’s UK and global sustainable mobility awards, recognising outstanding work to improve air
quality and cut carbon emissions. Our judges are looking for proven
innovation from business, the public sector and elsewhere.

The need is huge. With more than 400,000 early deaths
annually from air pollution in the European Union alone, there are huge opportunities for better mobility to
improve our health, environment and economy. This year has seen some exciting
news in sustainable travel, particularly around electric vehicles – but digging
into the data tells us that radical, wide-ranging change is still needed.

2019 has brought a slew of announcements about plans to
phase out petrol and diesel cars. Norway plans a ban by 2025, Ireland, Denmark
and Sweden by 2030, the UK and France by 2040. Cities are also prepared to lead
on this issue – in May Amsterdam declared a total ban on the vehicles from
2030.

Headline-grabbing stuff – but as scientists agree we have
roughly a decade to make dramatic progress on lowering emissions, many of these
bans could come far too late. And there is limited action from the world’s
biggest and most polluting nations – in the US, the biggest plans have been
announced in Seattle
and California, while China still hasn’t revealed a date for its ban,
announced in 2017.

The rise of electric cars has excited businesses and
politicians. They are a welcome improvement on fossil fuel-powered models, but
still come with a big carbon and environmental cost, from the impact of
building them to continued high congestion in our towns and cities. Radical
climate action – what’s needed to prevent climate catastrophe – means ditching
cars everywhere we can. This won’t happen without practical, affordable alternatives,
accessible to as many people as possible.

So it’s good to see that growth in electric buses has continued,
driven by China – home to 98% of the world’s fleet. A recent report
by analysts Wood MacKenzie found adoption was set to triple by 2025. Forecasts
of 300% growth over just a few years might suggest the days of the
heavily-polluting bus are numbered – but that growth is starting from a very
low base. The report predicts that even by 2040, most new buses will still be
fossil-fuel powered.

We can’t pin our hopes on silver-bullet technology – we need
to create environments and systems that make greener travel a sensible,
attractive choice for everyone. This year our judges in both award categories
will look for work that encourages behaviour change, as well as new products
and infrastructure projects. And they are particularly keen to see work that
boosts cycling and walking, the most sustainable way to travel shorter
distances.

Eligible work might include designing neighbourhoods, city
centres, homes and offices in ways that allow and encourage active travel and
use of public transport. Or it could mean ground-breaking apps and new ways of
sharing travel information. It might mean cutting the need for travel
altogether, through technology or urban planning.

Our international award, focused on developing countries, recognises
work that reaches people who previously had inadequate access to transport and
the employment and education opportunities it brings. We are particularly
interested in work that makes it easier for women and young families to move
around, and we’d like to see applications from organisations that are reducing emissions
of both informal and formal public transport.

The UK award will look for innovation with wider social and
economic benefits beyond reduced emissions and air pollution. Applications from
businesses, charities and local government are eligible, and we welcome schemes
that involve moving goods, as well as personal travel.

Holistic approach pays off for 2019 winners

This year’s Ashden transport award winners impressed the
judges with their holistic approach to solving huge transport challenges. The
organisations overcame big political and economic challenges – showing the
value of an ambitious approach.

In the UK category, the London Borough of Waltham Forest carried out a bold campaign to promote active travel. This
included road re-designs, creating new public spaces, community cycling schemes
and more. It was shaped by feedback from residents, and aimed to do more than
ease congestion and improve air quality. Delivering benefits such as better
public spaces encouraged community support and helped it overcome a rocky
start.

In some of India’s most polluted cities, international award
winner SMV Green is helping poor people dramatically boost their income as
electric rickshaw drivers. This work goes far beyond supplying a vehicle – SMV
have created finance packages accessible to those with few savings, and helped
drivers open their first bank accounts. They have also addressed gender
inequalities with a scheme supporting female rickshaws, who have previously
been denied opportunities in this area.

This year’s awards could not be more timely, as global
carbon emissions increase, and so do the warnings. Just a few weeks ago, the
head of the UK’s National Health Service declared an air
pollution emergency. The solutions must give people the transport they need,
while protecting their lungs and the planet. 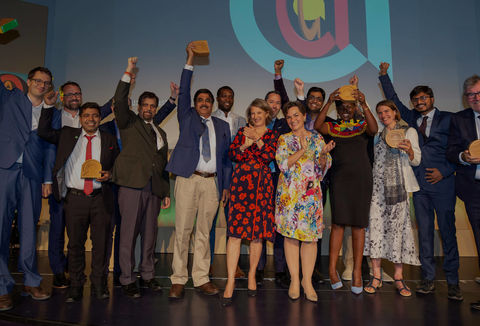