Untreated water and poor sanitation cause an estimated 10 million cases of diarrhoea and 10,000 deaths each year in Cambodia. Most are children under the age of five, who come from rural areas.

Since 2001, iDE has manufactured and promoted ceramic filters as a low-cost alternative way to provide clean drinking water in rural Cambodia. Production has increased rapidly since 2010 through iDE subsidiary, Hydrologic Social Enterprise. Hydrologic manufactures filters and sells them to NGOs, through retailers and, increasingly, directly in villages through trained sales agents.

Bringing clean water to around 420,000 people

Use of largely-unsustainable wood is cut by about 18,000 tonnes per year

"We did not boil the water before and my daughter often had diarrhoea. But she’s never had it since we got the Tunsai filter."

Untreated water and poor sanitation cause an estimated 10 million cases of diarrhoea and 10,000 deaths each year in Cambodia. Most of those who die are children under the age of five. Most of them live in rural areas, where less than 5% of households have piped water. Diarrhoea and other water-related diseases also impose a heavy economic burden, because of the cost of healthcare and lost working days.

Most rural Cambodians get their drinking water from a combination of surface water sources, shallow wells, and rainwater catchment. These sources are often contaminated because of poor sanitation, unsafe storage, and use for washing and by animals. Often the only practical way to make such water safe to drink is by boiling it, using wood or charcoal as fuel. This can be effective, but it comes with an environmental cost because Cambodia has one of the highest rates of deforestation in the world and fuel wood use contributes to this (see box).

Since 2001, iDE has manufactured and promoted ceramic water filters in Cambodia as a simple low-cost alternative for both producing and storing clean drinking water without the need to use wood for boiling. Filter production has increased rapidly during the past two years through a spin-off business, Hydrologic Social Enterprise.

iDE is an international not-for-profit organisation that works to eradicate poverty in Asia, Africa and Latin America by creating opportunities for poor rural households to improve their livelihoods and sources of income. iDE started working in Cambodia in 1994 and has focussed on different aspects of water and sanitation including treadle pumps, drip irrigation and low-cost latrines as well as water filters. It has also established a network of farm business advisors who provide technical advice and agricultural inputs to small farmers.

There’s plenty of water for my family of four. But because we keep the water filter outside, people from other houses come and drink the water too! I don’t really mind, but when we go to the fields all day, I’ll keep it inside so that kids don’t knock it over.

Hydrologic is a wholly owned subsidiary which iDE set up to commercialise and expand the production and sales of water filters and, in the future, other water, sanitation and hygiene products. Hydrologic was formally registered as a limited company in December 2010. Grants from USAID and PATH and a loan from iDE has enabled Hydrologic to build a new factory and set up its sales network. In 2011 Hydrologic had an income of about US$700,000, 70% from sales and the rest from grants, and employed 41 people.

Hydrologic manufactures water filters at its factory about 40 km north of Phnom Penh. They are sold under the brand name ‘Tunsai,’ the Khmer word for ‘rabbit’ (rabbits help humans to solve problems in Cambodian folklore). The factory currently produces two models, the basic Tunsai and the new ‘Super Tunsai’ which has a larger storage volume and more attractive external styling.

About 60% of filter sales are currently to NGO programmes. Hydrologic will not sell the Super Tunsai to NGOs, to limit distortion of its commercial market (see box p3), but both models are sold through retailers, mainly household goods shops and pharmacies.

Since 2010, a programme for village-to-village water filter sales has been developed and is now being scaled up in rural parts of Kampong Speu province. Hydrologic recruits and trains commissioned sales agents, each of whom coordinates with village chiefs to arrange group sales meetings in about 20 villages per month. The village presentations emphasise the importance of clean water in general and highlight the convenience and cost-saving of using a water filter compared with boiling. A representative from Hydrologic’s MFI partner, VisionFund, also takes part in the presentation and villagers can sign up for a loan. Water filters that are purchased by either cash or loan are delivered to customers within three days.

The core of the water filter is a porous ceramic pot, rather like a large flower-pot. This is impregnated with silver nitrate. When the pot is filled with untreated water, the water can pass through the microscopic pores but bacteria and other particles are physically blocked. The silver kills any bacteria that manage to penetrate the ceramic.

The pot fits snugly into the top of a specially designed plastic container with a lid to protect against recontamination. The container has space to store about 12 litres of clean water and a tap to dispense it.

The water filters are targeted at households earning between US$1 and US$5 per person per day. The Tunsai and Super Tunsai models currently retail for about US$13.50 and US$23.50, respectively, with replacement ceramic pots available for US$5.50.

For village sales, VisionFund loans for water filters are charged at 2.8% per month for 6 months, and the VisionFund agent visits each month to collect payments.

NGO programmes usually subsidise the cost of filters, although Hydrologic encourages them to make some charge to users, since ‘give-aways’ can undermine local markets, and the filters themselves tend to be less valued and thus less well used.

How is it manufactured, operated and maintained?

The principle of the ceramic water filter and the basic design were developed in Latin America by the NGO ‘Potters for Peace’, which provided the initial training in manufacture to iDE. iDE and Hydrologic have since modified the design to make it more suitable for Cambodian raw materials and the rural Cambodian market.

I make sure that I do sales presentations in at least five villages every week. Sometimes no one wants to buy – and other times, 20 people want to buy. Often people wait to see how their neighbour likes the filter and then they buy one themselves.

Filter pots are made from local clay and powdered rice husk at the Hydrologic factory (see box). The same filter pot is used in both the Tunsai and Super Tunsai models, but the plastic container, styling and packaging differ, and the Super Tunsai has a larger volume for storing clean water. 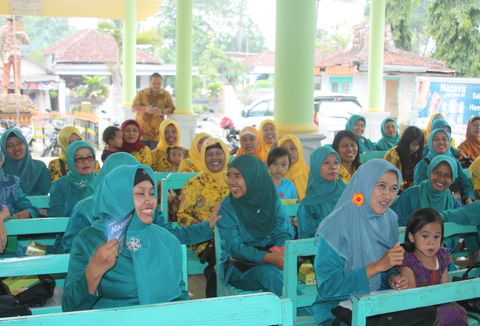 The filters are simple to use. The pot is filled to the top with untreated water which filters through at between 2 and 3.5 litres per hour. Filling the pot twice per day provides 20 litres of drinking water, sufficient for the average Cambodian family of 4.7 people. If needed, more drinking water can be produced by refilling the pot more frequently.

Maintenance is also simple. When the filter flow rate slows down, the inside surface of the ceramic pot is scrubbed with a plastic brush to remove sediment build-up. This is typically needed about once a week, but more often if the water source has a high content of suspended solids. Hydrologic recommends that the plastic container be washed with soapy water at the same time.

Research has shown that the filters remain effective at removing bacteria for many years (at least four years according to one rigorous study done in Cambodia). In practice, however, the pots do become irreparably clogged or broken over time and a replacement is needed. The average service life of a filter in day-to-day use has been measured as two years.

Assuming a service life of two years, Hydrologic estimates that about 90,000 filters were in use at the end of February 2012. With 4.7 people in the average Cambodian household, this means that about 420,000 people are getting clean drinking water from Tunsai water filters.

Water filters cut the use of wood, used directly or as charcoal, for boiling water. The carbon finance Project Design Document (PDD) for Hydrologic estimates conservatively that the average household saves 0.2 tonnes/year of wood, and that about 73% of this wood comes from non-renewable sources. This means that water filters directly reduce deforestation. Total wood saving is about 18,000 tonnes per year, with over 13,000 tonnes of this from non-renewable sources.

I’ve been doing this job for a year and I really enjoy it. I earn good money and I’m doing something that helps my people – and I don’t have to travel very far from my home.

Cutting the use of non-renewable wood reduces the emission of CO2 and other greenhouse gases. The PDD makes a conservative estimate of 0.46 tonnes/year CO2 e saving per household, so currently a total of 41,000 tonnes/year CO2 e.

The immediate social benefit of Hydrologic water filters is the provision and storage of clean drinking water for individual households. Laboratory assessments of water produced by the filters confirm that it meets the WHO guideline for low-risk rural water supplies (less than 10 E.coli bacteria per 100 ml). The effectiveness of the filters has been also shown in a field study by the University of North Carolina, which found 46% lower incidence of diarrhoea in water-filter users, compared with a matched rural control group4.

Filters have been used extensively by UNICEF, the Red Cross and other organisations during flood relief, giving families an emergency source of clean water that can also be used when they return to their homes.

Households that had previously purchased fuel save an average of US$17 per year with a water filter. However, the value of time spent collecting wood and boiling water, reduced healthcare costs, and increases in productive time is even more significant. A financial and economic analysis by iDE using World Bank methodology suggests that the net financial benefit of water filter use to a family is about US$73 per year.

The production and distribution of water filters in Cambodia has generated employment, mostly in rural areas where it is badly needed. The Hydrologic factory employs 26 people who earn between US$65 and US$105 per month, similar to salaries in the Cambodian garment industries but without the expense and social disruption of migrating to cities. Sales agents are provided with expenses and work on commission, and over the past six months their earnings have averaged US$150 per month.

Job opportunities will soon expand. Hydrologic is expanding village-based sales in new provinces of Cambodia by recruiting and training new sales agents. Income from carbon finance will enable Hydrologic to improve the filter product, keep filter prices low, and reach poorer and more remote households. Hydrologic will soon expand its product range, and aims to have reached one million households with clean water, sanitation or hygiene products by 2020.

The basic concept of the ceramic water filter is well known. What iDE and Hydrologic have demonstrated is how to scale up production and achieve commercial sales in the rural areas where clean water is most needed. Such achievements could be replicated in many countries, particularly those like Cambodia with extreme pressure on wood resources.