Miles and Gail Fursdon’s 2004 Ashden Award recognised their personal achievement in developing a micro-hydro scheme on their family farm.

Miles and Gail Fursdon designed and built a 90 kW micro-hydro scheme at Old Walls, their family farm which lies within the Dartmoor National Park. The primary need was to provide an additional source of income for a hill-farming family. They also recognised the value of a practical demonstration of sustainable energy.

In 2003 the scheme generated about 400 MWh/year of electricity, equivalent to the energy consumption of about 90 homes.

The scheme avoids about 220 tonnes of CO2 per year.

Two acres of mixed hardwoods, planted in parallel with the hydro development, have become a popular site for wildlife photography.

Miles Fursdon is fascinated by hydroelectricity, because Old Walls farm where he’s lived all his life had been powered by a small hydro plant since 1936. It was obvious to him that the West Webburn river could supply more than just their family farm, so in 1995 Miles and Gail Fursdon designed and built a 90 kW micro-hydro scheme.

The scheme draws water from the river and channels it along the hillside in a leat. It then falls down a 100 m pipe and turns the micro-hydro turbine, before returning to the river. About 400 MWh of electricity is exported to the grid each year, offsetting about 220 tonnes/year of CO2 and supplying the equivalent of around 90 homes.

The Fursdons had to overcome concern about developing a scheme of this type within the Dartmoor National Park. But with sensitive siting, the scheme was supported by the Park Authority and Environment Agency, as well as by the local Parish Council. Local school-children studied the construction, and Miles and Gail now offer walks and talks for all types of audience.

The plant has made a significant contribution not only to environmental protection, but also to the economy of a local farming family and community. Both the Fursdon’s children have returned to work in the area, and their son-in-law runs his own renewable energy business. 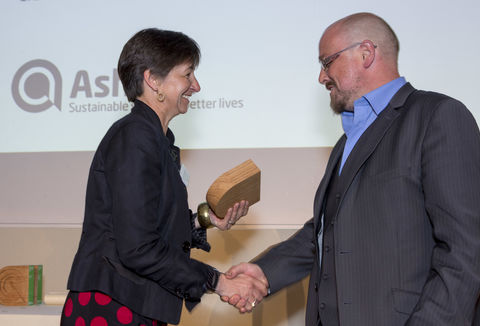